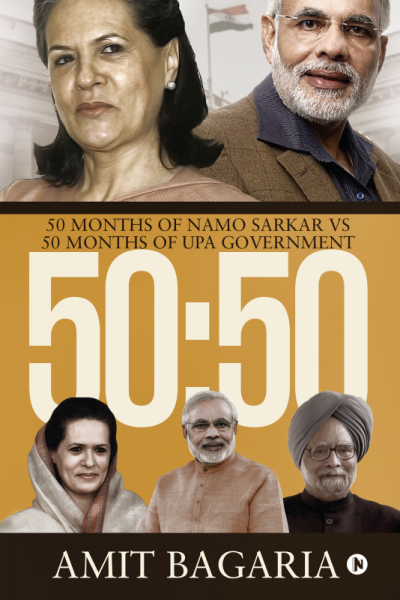 On July 26, 2018, the Modi Government completed 50 months in power. This book studies the progress made in 50 months of Modi’s rule, and where possible, comparisons have been made with the first (or last) 50 months of the Sonia Gandhi-led UPA government.

By the time the book is in your hands, elections for India’s 17th Lok Sabha would be very close. The upcoming election is perhaps more important in the 66-year-old election history of our 71-year-old nation, than any other ever before.

If we do not allow this enormous transformation of the past four years to continue till its logical end, we will not achieve the greatness that we are capable of. China is almost all the verge of overtaking USA as the world’s strongest superpower, and even USA is on comeback mode. If we flounder the opportunity this time, we may not get another one in the next two to three decades.

The 2014 general elections were a combination of two factors – a very strong negative wave against the UPA government, combined with a fairly strong wave in support of a rising regional leader, the underdog, who was new to the national scene, and a bit of an enigma. This made it easy for the Modi-led Bharatiya Janata Party (BJP) to sweep the polls with a clean majority, the first time in thirty long years. This time it will not be easy for the BJP, or for Modi himself, as he is no longer an enigma or a mystery.

As this is my second book on a subject that some people may consider similar – it is necessary for me to clarify. The first book - 1914: NaMo or MoNa - covered electoral politics since 1980, and was based on research data. This book is quite different. It covers about 25 programmes of the Modi government and provides official statistics from the government itself. Wherever possible, the work of Modi’s government is compared with their predecessors, the UPA-I&II governments led by the unelected “Empress of India”, Sonia Gandhi.

Most data has been presented through attractive visuals to make reading easier.

Bengaluru based Amit Bagaria is a serial entrepreneur who turned author in late 2017, and has already published three nonfiction books, this being his fourth. He has already completed writing seven books in about ten months, and is reading (researching) and writing for about 80-90 hours a week towards achieving his self-established goal of “SIXTY BY SIXTY” – that is, authoring & publishing sixty books by the time he turns sixty in October, 2025.