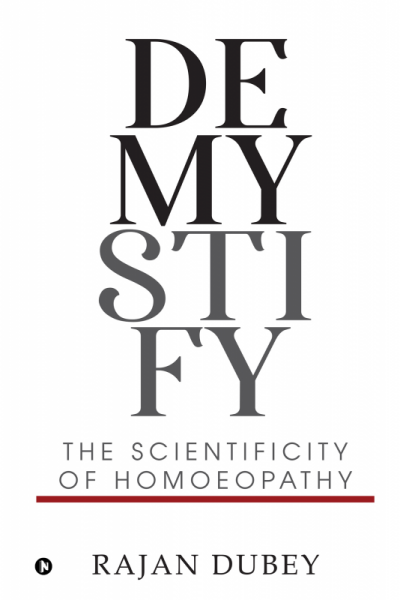 DEMYSTIFY The Scientificity Of Homoeopathy

“A phenomenal journey of unveiling the Scientificity of Homoeopathy that has been mysteriously masked since time immemorial.”

This book unfolds the latest, astonishing evidence-based discovery as to how foreign exogenous proteins are capable of disrupting the homeostasis of our body and predisposing it to chronic diseases or chronicity. Dr. Hahnemann has strongly asserted that, “Treat the person as one whole and not his individual parts”, which holds true because when a person falls ill, it’s the interior that gets disturbed first. This disturbance not only disseminates to the functional unit of the body, i.e., the cells, but also pervades the proteins, which form a major constituent of our body.

Dr. Rajan Dubey, renowned for his scientific and evidence-based writing, has described the intricate process by which protein disturbance occurs and chronicity commences in our body. He also accentuates the role of external influences like emotions, diet and environment in governing our DNA and genes, whereby exciting and maintaining the disease process.

To substantiate the scientificity of the Theory of Chronic Diseases proposed by Dr. Samuel Hahnemann and also to facilitate its easy and practical utility even in today’s era, we took up a retrospective study of a random sample of 30 patients from a pool of around 10,000 patients visiting MEDIGENE HOMOEOCARE, our clinical institute located in Mumbai. The purpose of the study was to trace down the precursor leading to chronicity in each patient. Amongst these, 10 cases are explained in complete detail to serve as a practical guide to the readers. An insight into the remedies, holding close proximity to the case and the differentiation between them, has been imparted as well.

Dr. Rajan Dubey is a coherent thinker, a research-based author and a renowned physician who has always expounded and encouraged the substantial co-relation that Homoeopathy and science retain.

A scientific researcher, his writings have always been evidence-based and were highly acknowledged since his very first book True Perception of Chronic Diseases. Two of his gross pathological cases were published in an internationally-acclaimed homoeopathic journal – Interhomoeopathy, in June 2014, which received worldwide admiration.

He is a far-sighted man who always wanted to surpass the aperture by building a bridge and reaching the underprivileged areas facing a paucity of medical services, which led him to establish his trust – ‘Medigene Homoeopathic Research and Development’ (MHRD) in 2012.