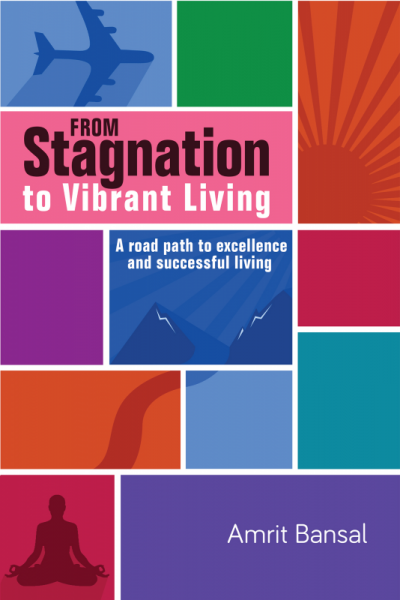 From Stagnation to Vibrant Living

From Stagnation to Vibrant Living offers useful insights to the common man as on how to fully utilize his sojourn on earth. Shri Amrit Bansal elaborates at length on the crucial and existential issues of life that have confronted mankind since time immorial such as what is the meaning and purpose of life. He deals with all aspects of inner and outer complexities of life in a very simple, lucid and riveting style and tells you on how to lead a happy, contented and a fulfilled life. The book lays down a road map to excellence and achieving success. Shri Bansal goes on to give you valuable and practical tips on how to achieve success. The book throws light on how to make the right decisions at the right time and tells you on how to set your goals in life with vision and clarity of mind. He advises his readers to live in the present moment and start doing their work instead of indulging in useless thinking. He further tells you to keep on trying and you should never get disheartened by your failures as each failure brings you one step closer to success. You should always work hard with single-minded devotion with self-believe and should always remain focused. He further elaborates that you should follow your instincts when you are in a fix as what to do. This book deals with the importance of having a positive frame of mind and advises you never to lose hope as there is always a sunshine after the rains and light at the end of the tunnel. It contains useful tips for time management which is very important in multitasking of the modern day complex life. It also explains the importance of developing your emotional intelligence in tough situations that you may have to face in your life. The book elucidates the benefits of having a good health because a sound mind resides only in a sound body. Some business management tips have also been given in the book for young entrepreneurs.

Amrit Bansalwas born on October 6, 1950 at Jaitu, District Faridkot, Punjab, India. He passed his matriculation from Govt. H. S. National High School, Jaitu in March, 1966 with flying colors and obtained his B.A (Hon’s) in English from Govt. Brijendra College, Faridkot in April, 1971. He obtained his degree in law from Kurukshetra University, Kurukshetra in April, 1974 and practised law at District Courts, Faridkot from 1974 to 1978. He was appointed as Executive Officer in the Municipal Administration of Punjab in 1978 and has served as such at the stations of Mohali, Zirakpur, Derabassi, Kharar, Kurali, Morinda, Goniana, Nangal, Gurdaspur, Abohar, Pathankot, Ropar, Anandpur Sahib and in U.T. Administration, Chandigarh with distinction. He was instrumental in the development of the new towns of S.A.S. Nagar (Mohali), Zirakpur, Kharar and Anandpur Sahib. Thereafter he went on a business leave for three years and successfully started a real estate company in 2004 at Mohali. He is currently practising as a lawyer in the Punjab and Haryana High Court at Chandigarh since March 2009. His interest in writing started at the age of thirteen. He has condensed his vast experience of life and dealing with public in this book From Stagnation to Vibrant Living for the benefit of his readers.