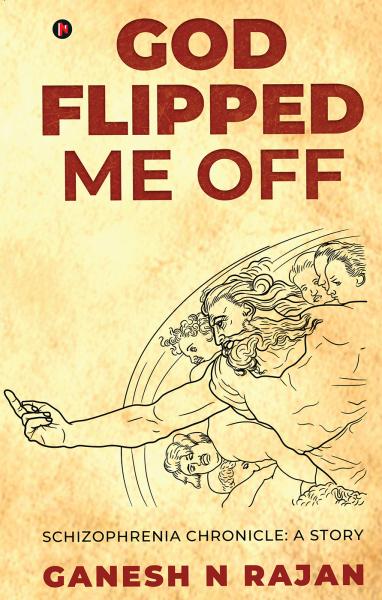 GOD FLIPPED ME OFF SCHIZOPHRENIA CHRONICLE: A STORY

“God Flipped Me Off” is a work of fiction that aims to entertain while it informs.

After a successfully published non-fiction book on schizophrenia, “I, Me and Us” (Westland 2015), Ganesh N Rajan now dips into ideas, and actual events derived from lived experiences to weave into fiction, this time around.

It is a story of a traditionally brought-up Indian individual, facing fate and creating destiny, of the inevitable, the invited, and the invented, providing a peek from the inside into the condition’s complexities.

Many consumers should benefit, from recovering patients, caregivers, mental health professionals to just curious bibliophiles. All of its readers will find insights and concepts that could demystify personal wellness for each of us.

Schizophrenia affected Ganesh N Rajan, now 62 years, in his late teens. He reasoned his way out and came to terms with the condition. Ganesh went through the entire symptomatic spectrum of the imbalances, gaining insights until it culminated in near-total remission.

In "God Flipped Me Off," he makes it easier to understand its symptoms with explanations as an insider. He describes the odd social interactions, plausible explanations for the disorder's effects, and the evolving knowledge around schizophrenia, arranged as a fictional chronicle.

Ganesh is an engineer with an MBA in International Business and a Master's degree in Social and Applied Economics from Wright State University, Ohio, USA. He was a consultant in various capacities for businesses in the USA, India, and Japan.

He is married, with children, and believes in cheering all the way…