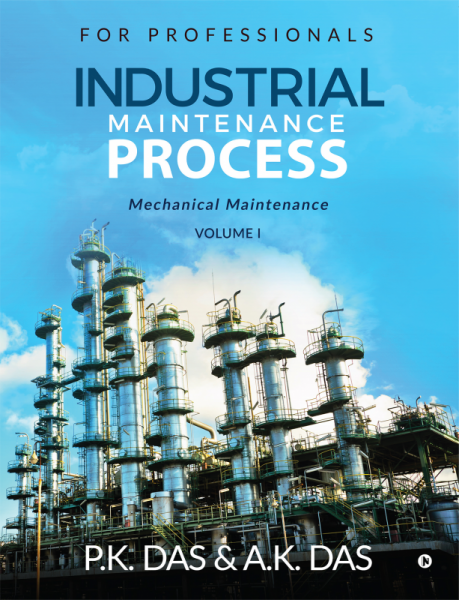 This book Industrial Maintenance Processes [Mechanical Maintenance] is intended to meet the requirements of all categories of professionals starting from technicians to engineers in the maintenance field to endow them with indispensable information on maintenance processes to work in the industries.

The book provides a thorough understanding of Material of Construction (MOC), operation of units, plant processes, behaviour of related equipment while in operation, basic maintenance processes and maintenance philosophy of an entire plant to accomplish the entire maintenance programme.

To establish a link between institutional knowledge and industrial practices, most related theories and relations have been added, which will facilitate fresh engineers to grasp maintenance philosophy. In addition, some national and international standards have been referred to, which are commonly followed to maintain the global maintenance standard.

The knowledge gained from this book will help readers solve the elementary and difficult problems faced by skilled manpower and modern young engineers, while working in relevant industries.

This book is written based on hands-on experience, standard maintenance processes and Original Equipment Manufacturer (OEM’s) instruction and in-depth knowledge gained by the authors while working in this field.

The maintenance processes have been explained in lucid language using maximum related figures for easy understanding of all categories of professionals. To have a better clarity & explanation, sentences used at places are in the form of instruction.

A grass root process and power plant engineer, he acquired his engineering qualification from The Institution of Engineers (I), Kolkata both in Chemical Engineering and Mechanical Engineering in the year 1981 & 1988 respectively. He also possesses Boiler Operation Engineering (BOE) proficiency certificate from the Directorate of Boilers, Kolkata. He has completed his Graduate Diploma in Materials Management in 1989. Subsequently, he became a Fellow from The Institution of Engineers (I) in 2003.

He was involved in the commissioning of FCI-Talcher, HFC-Haldia, and HFC-Durgapur (CPP). He commissioned over twenty power plants in captive range from 4MW to 150MW, comprising of all types of boilers having fuel of all kinds. Another noteworthy achievement is that he was involved in commissioning and O&M of the biggest solar thermal plant in India of 100MW at Pokhran, Rajasthan.

He has prepared the O&M manual for a steam turbine of Skoda make and developed extensive SOP & SMP of power and other industries, which are in use in power industries. Presently, he is the Head of O&M in Ayoki Fabricon Pvt. Ltd. to look after its Operation & Maintenance business, which is spread globally. He has also authored the book An Introduction To Thermal Power Plant Engineering & Operation.

Dr. A.K. Das is a professor at Maulana Abul Kalam Azad University of Technology (Formerly West Bengal University of Technology), West Bengal. Before joining the university, he was the Registrar at MCKV Institute of Engineering, Howrah (WB), Professor & Dean (Academic & Planning) at Durgapur Institute of Advanced Technology and Management, Durgapur, WB for more than 10 years. Prior joining in academic institutes, he was associated with various multinational and government organizations in different managerial positions for more than 24 years.

He has published many research papers in international and national journals. He is the research guide for PhD students in NIT, Durgapur and Calcutta University, WB. He is a consultant of Fly Ash Utilization and Management.

A member of various professional societies such as the Institution of Engineers (India), Indian Institute of Chemical Engineers (IIChE) and Coal Ash Institute of India, Dr. Das is a chartered engineer. He has authored the book An Introduction to Thermal Power Plant Engineering and Operation.