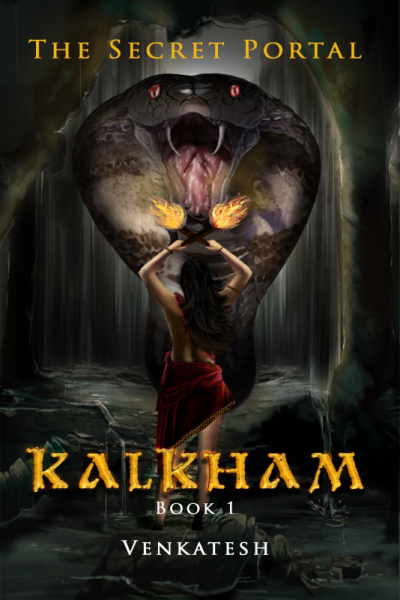 The president of Egypt is helpless. The curse of the pyramid had struck again. The excavation of treasure had come to a standstill. Dr. Upen, an eminent scientist from India, offers help, relying on his research on black roses. There is only one way to revive the ten scientists from coma, the Lilbido. Mysteriously, the lone bottle of Lilbido is stealthily carted away by impostors.

A thrilling mythical mystery revolves around Kalyan, who embarks on a quest in search of his grandfather who is supposedly leading the life of a recluse. A complex journey takes him through many adventures and realities. He meets a tribal community and is regarded as an incarnation of their god, Sunzen. A mermaid’s collection of the rarest gems reaches out to Kalyan. Why?

A prophecy reveals Kalyan’s true identity in the snake mountain. Hidden chapters of Ancient Civilizations unravel Egypt’s occult past, a curse on fire, Kumari Kandam, the lands ruled by seven demigods, and the monstrous serpent, Nagaraja, who resides deep under the Indian Ocean.

Rahasi, the tribal chief’s daughter, is aware of Kalyan’s next move. She is confident that destiny will play its part in due time. Can he succeed by human prowess?

Zhautren has vowed to plunge the world into darkness. The next galactic alignment is nearing.

The KALKHAM mystery deepens. Who really is Kalyan? Why has he taken a human form?

Venkatesh is the author of the KALKHAM mystery series. He is passionate about writing fiction novels. He loves travelling to exotic destinations.

KALKHAM originated from a deep–rooted thought process, and was built purely based on the author's imagination, experiences and research.

The inspiration for this work is credited to Veda Vyas, the ancient Indian sage who compiled the Mahabharath.