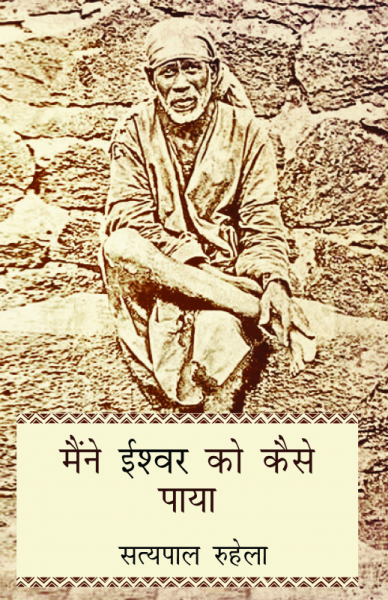 This is the Hindi version of the unique spiritual book ‘How I found God’ by the eminent Zoroastrian spiritualist Yogi Minocher K. Spencer (1889-1958). In it, he has very painstakingly recorded all the wonderful day-to-day messages and instructions received by him in his daily mediation sessions from the great Spirit Master Rishi Ram Ram during 1942-1946 and there-after from Ahura Mazda (God) assuming the form of Sri Shirdi Sai Baba (who had became God after his completion of his avatari career in Shirdi in 1918). Also recorded in it are the various encouraging occasional messages of Spirit Masters like Zoroaster, Krishna, Christ, the Buddha, Meher Baba, Raman Maharishi, and Madame Blavatsky. .

His soul had taken only three human births in which it craved for the realization of God. To fulfill its ardent desire for God, in the first birth, it was in the form of Patricio (1213-1339) who became a very famous Italian Christian peripatetic monk But he failed to have the revelation of God as he despised all other religions.

In the second birth, it was embodied in the form of a poor and unhappy married South Indian Hindu woman who also, despite her virtues, great sacrifices and selfless social service in her slum, could not have the revelation of God due to her over attachment for her own children.

In the soul’s third human birth as Minoo (Minocher), God ultimately fulfilled its ardent desire for the revelation of God by appointing the great Spirit Master Rishi Ram as his guardian Spirit Master and later in 1946 took over the role of imparting him spiritual training. Sri Shirdi Sai Baba, as Ahura Mazda (God) strongly motivated him to selfless service as Secretary of Leper’s Hospital in Karachi, do prolonged and intense Sadhana(Meditation), contact spirits of the Other World, study spiritualism and write Spiritual poems and books. HE gave the title ‘How I found God’ in 1949 to Yogi Spencer. He was able to complete this divine assignment in 6 years, two years before his merger in God in 1958. His 2000-page typed manuscript was published in a 1396 page book in four volumes as proof form and that too as a very limited edition of only 100 copies by the Spiritual Healing Centre, Coimbatore, in 1956 Sri K.S.D. Aiyer, the founder and Secretary of that Centre has transferred the copyrights of all the books of Yogi Spencer to his fellow sadhka Sri A .Somasundram founder & secretary of .Divine Centre of Markapur in 1962.

By the invisible divine command and help of Sri Shirdi Sai Baba, this great spiritual work of Yogi Spencer was discovered and procured by S.P.Ruhela from Sri Sri A.Somasundaram in 1998.He and he gladly gifted this book and entrusted the charge of spreading the mission of Yogi Spencer and transferred the copyrights of all his books of Yogi Spencer by editing and getting them published for the spiritual uplift of spiritual seekers. The original book ‘How I Found God’ was thus edited, abridged and condensed by him . and the edited version was published by New Age Books in 2011. It has there-after been translated into Hindi by Acharya Purshotamananda and edited, finalized and self - published by the editor.

Prof Sathya Pal Ruhela (eighty years old), born on 2 February 1935, is a pioneering Indian sociologist of education, a teacher, an educator, a spiritualist and an ardent devotee of both the Sai Avatars- Sri Shirdi Sai Baba and Sri Sathya Sai Baba. He has been in Sai’s fold for the last forty years. He has written books on sociology, Indian sociology, Somalia, education, spirituality and both the incarnations of Sai Baba. He served as a Professor of Education (Sociology), Head and Dean of the Faculty of Education, Jamia Millia Islamia (Central University), New Delhi. He was awarded Maharshi Bhrigu Samman in 2011 for his valuable contributions during his lifetime in the fields of behavioral sciences, literature, humanity and social development. He was given the honor also because of his extraordinary achievements by his innovative and positive thinking and commitment to being a thinker, scholar, researcher, scientist and teacher for national prosperity.
Read More...