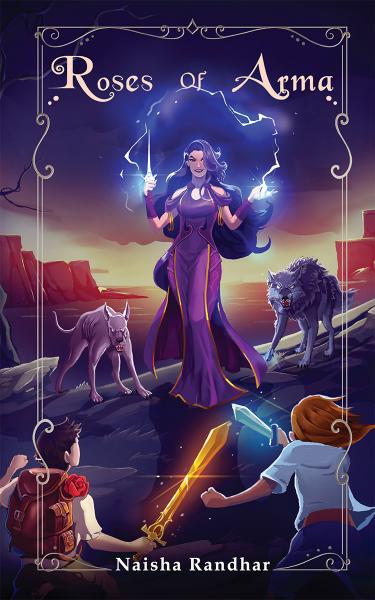 On the planet of Arma, in the queendoms of Calica and Timnock, two unlikely heroes, short in age but not in courage and tenacity, are declared in a prophecy to fight the evil clutches of Calypso, who is a powerful force of doom. They are swept into a whirlwind of danger to rescue the magic of the world, and in turn, Arma itself. Are they willing to make the necessary sacrifices, possibly even of their own lives, for the fate of the world?

The prophecy exhorts them …

Water and fire, united as one,

trying to see the mission done.

Only against the canine mother,

will they see how much they need each other.

Roses of Arma is the first book of the series – Heroes of Arma.

Naisha Randhar has dreamed of publishing a book for as long as she can remember. She has been an avid reader her entire life. She discovered her love for writing when she was six, and ever since, has spent hours every day writing stories and poems. The Heroes of Arma series is her pride and joy.

She lives in Frisco, Texas with her mom, dad, brother, and furry sister, a golden retriever. Roses of Arma is her first book.