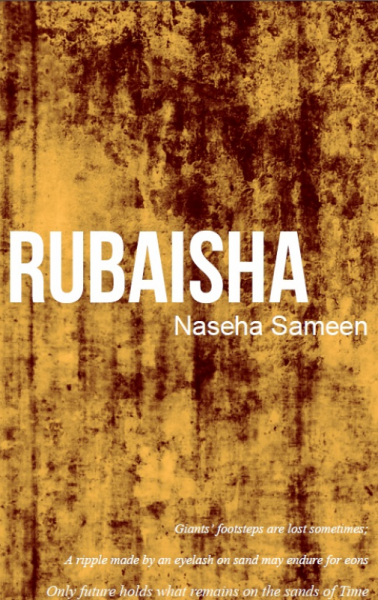 Giants’ footsteps are lost sometimes;
A ripple made by an eyelash on sand may endure for eons
Only future holds what remains on the sands of Time ....

Rubaisha is a fantasy teen story, of unexpressed love. It is light read, which brings out love in different form. The interesting fact is, the story revolves around love and passion, and however, it is not a love story. It is a story of passion, ambition, story of survival. Rubaisha is for light fiction readers, who would like to complete a book in one afternoon.

The story unfolds in two time period. One story line is based in present time, and another is in ancient Egypt. The story begins when two friends Angella and Andrew are planning to go to Egypt to spend their holidays. Angella’s father is a historian who is trying to prove that women in ancient Egypt (long before the time of Cleopatra) rose to the highest power.

He wanted to discover the historic remains of a queen Rubaisha who was ever present in folklore but not a shred of historic proof was found. Rubaisha seemed to be deliberately erased from history.

When Angella and Andrew reach Egypt they are greeted with a murder. When they try to find out the truth behind the murder, unexplained things begin to happen.

Rubaisha’s passion kept her alive even after her death. Time and destiny of these three individuals get entwined. As story unfolds, we see murder, curses and tale of untold love.

The story travels to past, where we witness life in ancient Egypt. We see the political power play. We see cover up and double crossing as power shifts from one person to another.

There are tides in affairs of men ....

I cannot agree more with Shakespeare. I loved to both read and write. Back in school and in college, my source of comfort and relaxation was to write. Then I was trapped in the words like practical life, feasibility and optimum solutions. I got a job! Writing was left far behind, but what remained was reading. My day starts and ends with minimum an hour of reading fiction. I would rather introduce myself as avid fan of Dan Brown and Jonathan Stroud.

For last ten years I wanted to go back to writing but some how lacked courage. I was afraid to give little time to my passion from my job which included project planning, feasibility tests, drive change management, automation, process improvement, customer experience, team and people management, transition, risk assessment/mitigation and revenue-cost optimization. Organization changed, FIS to American Express to Yatra, designations changed from Team member to Manager Business Analytic, still something kept pinching in heart. I did not feel complete.

Now that I have pulled out my long book and pen, I feel complete.