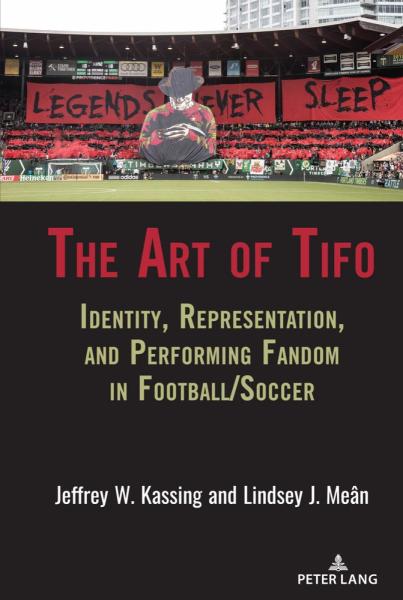 The Art of Tifo Identity, Representation, and Performing Fandom in Football/Soccer

Tifo refers to the artistic renderings that supporters at football/soccer matches perform. This can involve large banners, coordinated mosaic displays, and pyrotechnics. Originating in Europe, the tradition has spread across the world and to other sports. Tifos vary in size, content, and execution, but all emerge from the desire supporters have for signaling and displaying their collective community, specific identities, and extensive devotion to their clubs. Fans fashion tifos to communicate publicly about identity, sense of place, past success, politics, and heated rivalries. Their assorted content makes tifos a distinctive form of fan-generated communication. Traditionally, supporters display tifos only momentarily before football/soccer matches. Yet they have become increasingly complex, sophisticated, and competitive—requiring dozens of people to create them, financial investments usually from fans to procure the materials needed to finance them, and on-site, in-stadium coordination to display them. These factors contribute to a unique, complex, and globalized form of fan communication that captures not only the obvious and intended messages of tifos, but also demonstrates the effort and devotion needed to execute them. This book examines the history and evolution of tifos, their social significance for clubs, places, and communities, the identities and associated affiliations they discursively perform, and the explicit and implicit symbolism they contain. Given the demanding practices surrounding the development and execution of tifos, and their overall captivating nature, this book should appeal to a broad audience including students and scholars working in sport as well as fans of it.