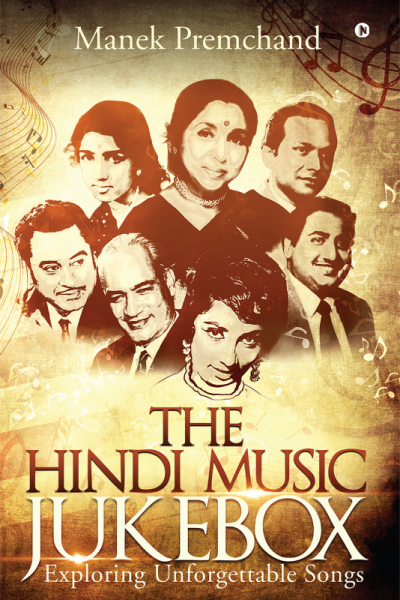 This Indian film music book is a collection of eighty essays about the people who made remarkable music in Bollywood cinema, especially during the great era, and the ideas such people brought to the recording studios. When songs had to go without rhythms or when melodies had plenty of Q n A in them. In this music book, we flirt with Rock n Roll and scan songs that speed up at the end, we peep behind the screen to see what the idea was behind chorus songs in our films – even if there was no one to sing that chorus on the screen; it’s a huge list. These pages are a reflection of the time when everyone was fired up in their art, and when no one wanted to finish last in the race. It is about artists who every now and then dreamt ideas, and only after crystallizing things perfectly in their mind’s eye, went out to translate and transform their dreams into unforgettable melodies in Indian movies.

Jukebox will interest the layman as well as the academician.

Manek Premchand has a Diploma in Journalism and a degree in Arts from Bombay University. He has many friends in the film industry, and remains fascinated by the enormous role that cinema has played as a key gluing medium in a country as disparate as ours. This fascination has motivated him to write five books on the subject. These are Yesterday’s Melodies Today’s Memories, Musical Moments From Hindi Films, Romancing The Song, Talat Mahmood—The Velvet Voice, and Hitting The Right Notes. A sixth book, Shiv Kumar Sharma—The Man And His Music, was co-authored with two others. Besides these, he has written hundreds of music-related articles for a variety of newspapers.

WorldSpace apart, a few years’ stints happened on All India Radio and the web portal www.bollywoodondemand.com. Manek Premchand is frequently asked to share his knowledge on stage shows and TV, and to address Rotary Club meets.