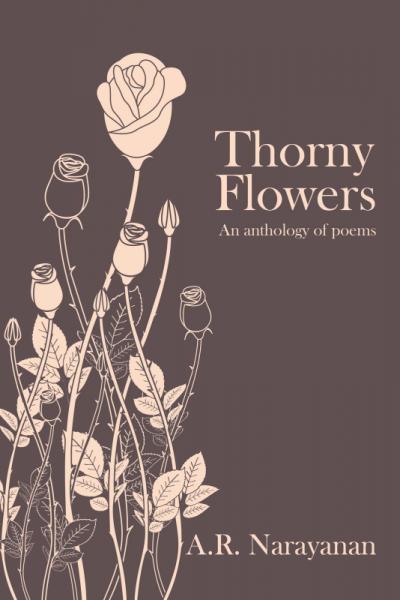 Thorny Flowers An anthology of poems

Flowers are blessed souls born with kaleidoscopic colouration, aesthetic beauty, far-reaching heavenly fragrance and, even medicinal properties, gifted by God. It peps up man’s varied moods, accentuate a celebration or muffle the sorrow when grief stricken.

Thence, everybody likes a flower.

Certain flowers grow sharp pointed thorns lurked beneath their attractive petals to save it from the onslaught of foes of wilderness.

But, only few are aware and realise it. those who are very busy have no time to pay for his own safety, will ignore it, fare the life without knowing what lurks on his way ahead.

A.R. Narayanan, Indian, living in the southern state, Kerala, spent major part of his life as a Business Management Counsel, specializing in Finance Management. At the age of thirty, he started writing articles and poetry, snatching some time amidst busy official schedules.

He wrote two anthologies one each in his mother tongue, Malayalam, and English and two versified translations of Malayalam Scriptures into English.

His first book was “Truth and the Myth”, couplet quips, published in India and later by the Gutenberg Publications of the Illinois University, U.S.A as an eBook.