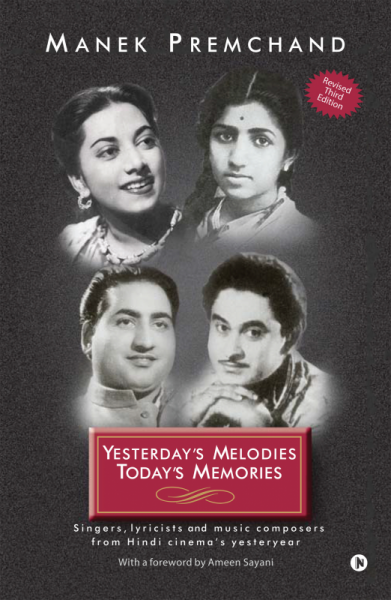 Yesterday’s Melodies, Today’s Memories is an attempt to profile the great artistes—singers, lyricists and composers—who were part of the huge tidal wave of Hindi cinema’s music from 1931 to about 1970.  Greater attention is given to the ‘50s and ‘60s, which period is now commonly considered the golden age of our film music. The book tries to bring these gifted people on the timeline of one stage, in a manner of speaking. Who was Manna Dey? What is the story behind the greatness of Majrooh Sultanpuri? How did the greats produce such greatness, and that too for so long? Was Mohammad Rafi for real? Khayyam and SD Burman, Shankar-Jaikishan and Sahir, Rajinder Krishan and C Ramchandra, OP Nayyar and Asha, Talat and Kaifi Azmi, Anil Biswas and Shakeel, Hemant, Madan Mohan and Mukesh, what are their stories? What made Naushad tick? Why did Shailendra and Geeta Dutt pass away so soon? In spite of being venerated so much, why don’t many people have a photo of Lata Mangeshkar in their homes? What is the story behind KL Saigal’s incredible superstardom? What propelled Ashok Kumar to become a singing-actor? Who put Shamshad Begum and Noor Jahan into high orbits? What is the quick story of Kanan Devi? But wait, there was Kishore Kumar, and along with him were Suraiya and Hasrat Jaipuri and Salil Chowdhury. What about Chitragupt? Not to forget Iqbal Qureshi and N Datta. Goodness, such a huge mass of incredibly passionate artistes!

The book has some rare interviews with many people from the era. It lists many songs created by these artistes, and in several cases, attempts to curate the songs they left behind—for many, a treasure too difficult to put a price on.

Yesterday’s Melodies Today’s Memories is a page-turning read, even as it has a lot of academic value as a reference tool.

Manek Premchand has a diploma in Journalism and a degree in Arts from Bombay University. He has many friends in the film industry and remains fascinated by the enormous role that Hindi cinema’s music has played as a key bonding medium in a country as disparate as ours. This fascination has motivated him to write six books on the subject. These are Yesterday’s Melodies Today’s Memories, Musical Moments From Hindi Films, Romancing The Song, Talat Mahmood—The Velvet Voice, Hitting The Right Notes, and The Hindi Music Jukebox. A seventh book, Shiv Kumar Sharma—The Man And His Music, was co-authored with two others. Besides these, he has written hundreds of music-related articles for a variety of newspapers.

He has also been a consultant with Saregama India Ltd, and a show host on many radio platforms, including WorldSpace Satellite Radio. He also teaches elements of Broadcasting to post-graduate students at Xavier Institute of Communications, a part of Xavier’s College, Mumbai. He is currently an Advisor to Manipal University Press. Some of his writings can be read at http://manekpremchand.com/