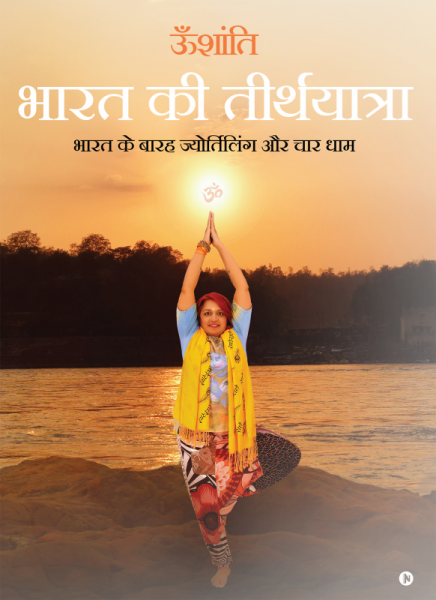 The shivalingam is the divine symbol of Lord Shiva, denoting his universal presence in everything. Shiva is pleased by the expiatory penance of his sincere devotee, and he manifests himself in the form of a Linga .

His indivisible resplendent power is left in the Linga which is subsequently admired as a Jyotirlingam. In the Shiva Puran and other religious scriptures, we come across the description of twelve jyotirlingas in total but there can be more also as most of the Puranas were depicted within two thousand years after the Mahabharata Era.

AUM NAMAH SHIVAYA mantra is the only way to purify the Mind, Body and Soul. It helps to achieve mukti or Moksha or the liberation of the soul.

This book recounts the personal journey of discovery and salvation by an ardent devotee, Aumshanthi, accompanied by Krish and Karishma. Aumshanthi traversed the length and breadth of India in her car–started from Bangaluru, covering 14000 k.m distance in 56 days. From Gujarat in the West to Uttarakhand in the North to Jharkhand in the East, to Rameshwaram in the south; on a pilgrimage unwavering in its quest for spiritual fulfillment. The book serves as a practical guide on pilgrimage centers in India, Twelve Jyotirlingas and Chaar Dhaam journey of the Temples, providing information on distances, hotels and lodgings and the history of the temples.

Ms. Aumshanthi is an attractive and enterprising young author who was born in New Delhi and started her career as a writer in 2002. She has authored the successful book, Indian Menus – A New One Everyday, published by Rupa & Co. Delhi. She has also written Spiritual Life and Satvik Aahar which was published by Xlibris Publications in Philadelphia U.S.A.

On popular demand, she even made a film on yoga, meditation and satvik food, titled AumShanthi, which was well received.

Her fourth book Aumshanthi's Devotional Journey Around India published by Broadway bookstore in Goa,describes several temples in India which she personally toured and wrote about.

Another aspect of Aumshanthi's Peaceful life is that she helps the disadvantaged by donating food, notebooks, clothes and household utensils to many underprivileged children through her trust.

Her motto in life is to give only love, knowledge, happiness, truth and peace to others. She harbours desire less Life and selfless Giving to achieve moksha.