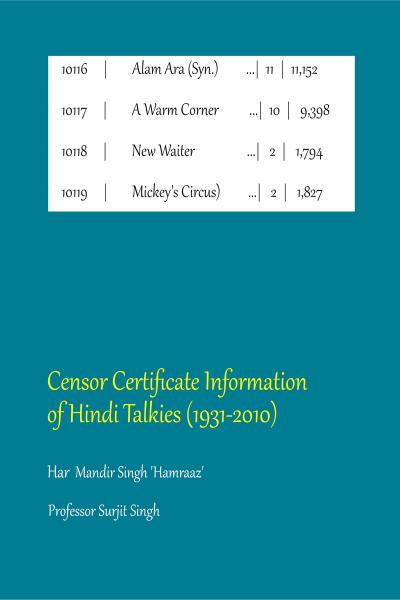 This is a reference book containing the censor certificate information of Hindi talkies from the first talkie in 1931 to 2010. It has the title, the certificate number and the center, length in feet, number of reels, certificate date, production company and other useful information. Some information about the type of film, such as 16mm, dubbed, 3D, Cinemascope, is also included. It is organized alphabetically by the first letter of the title. People researching Hindi films will find this book useful.

Born and brought up at Kanpur [India], he inherited the quality of love for music from his mother and mother's mother who herself used to be very good singers of Punjabi Shabad and folk songs. His earliest memories go back to 1958-59 when 78 rpm gramophone discs were played on during marriages and heard over the loud speakers. 'Do sitaaron ka zameen par hai milan aaj  ki  raat...' (Kohinoor), 'Dil  ki  kahaani  rang  laayi hai...' (Chaudhvin Ka Chand), etc. film songs are vivid in his mind which are tied with  his earliest memories. During his matriculation [1966-67], he started listing the songs of his choice but he was not satisfied because it always remained incomplete. He used to become restless for months together and continued spending hours to ascertain the name of film or singer or music director or lyricist of a particular song heard from broadcasting stations like Radio Ceylon, All India Radio (Urdu Service), Vividh Bharti, etc. In the absence of any authentic book which could provide him full credits of all songs of Hindi films, he was prompted to compile such information.
After completing graduation in June 1972, he joined the State Bank of India, Local Head Office, Kanpur in July 1972. After the shifting of Local Head Office to Lucknow in April 1982, he was posted at its Zonal Office, Kanpur. It was only after the beginning of publication of Hindi Film Geet Kosh volumes in January 1980 that he got married in December 1980 with Satinder Kaur who is now the publisher of these volumes. Having said goodbye to the State Bank of India on 30th November 2011 upon his natural retirement, he is now happily devoting his full time for the remaining compilation work.

He is a retired Theoretical Physicist.  He has been watching Hindi movies since 1952, has been collecting Hindi songs, movies and magazines since 1969, and has been writing about these things since 1996. He has had a website since 1999,