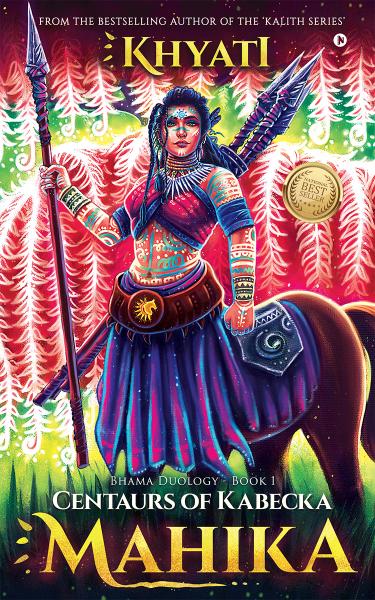 Cut off from the rest of the world, the island of Kabecka in the Indian Ocean is a haven to a veiled race of enigmatic and barbaric centaurs. Under the temper of an anticipated civil war between its two tribes, Bhama and Dhuni, every inhabitant is vigilant and wary.

A disapproving Bhama is dealing with the impending change in rulership to the widely detested half-breed orphaned sisters, Mahika and Venya, notified to be the future Aahi and Danuwoa of the tribe by their waning king, Mihraan. Amidst the bedlam of their training with the Obaka, the towering formalities of the royal life, piling work at their home foundry, an ambush on Mahika’s engagement ceremony and a human intruder, the loathed sisters realize that they are not the only ones fostering ghastly secrets.

The unforeseen poisoning of the Mataoka tree, whose enchantment protects them against humans, throws the sisters into a spiral of controversy and sabotage, as the duty of recovering the elements of the Svar falls unto them. From the apprehension of fighting the Pernicious Pixies, the trepidation of dealing with the Kabeckan Mers and the unfeasibility of bargaining with the unhinged Sorceress Hyma, while confronting their Irrikums, the centauresses tread a noxious path on a covert expedition to save the homeland founded by their great forefather, Raassa the Ruthless.

From the author of the national bestselling Kalith series comes Centaurs of Kabecka : Mahika, the first book of the two-part Bhama Duology.

Khyati Agrawal Gupta is the record-holding, national bestselling author of the Kalith series. She is also a professional doodle artist and the founder of dOOdle BARF (est. 2015). She is an animation and multimedia graduate with a diploma in psychological counselling.

Khyati’s books of the Kalith series hold the record for ‘enthralling fictional novel series’ by the India Book of Records. She was also awarded with the title of ‘Grand Master’ by Asia Book of Records. Her books have been a phenomenal success and were featured in newspapers like The Asian Age, Deccan Chronicle, DTNext, Telangana Today, etc., and in numerous blogs and websites. Khyati has also appeared on the covers of magazines like Torch Head, Literary Voice, etc.