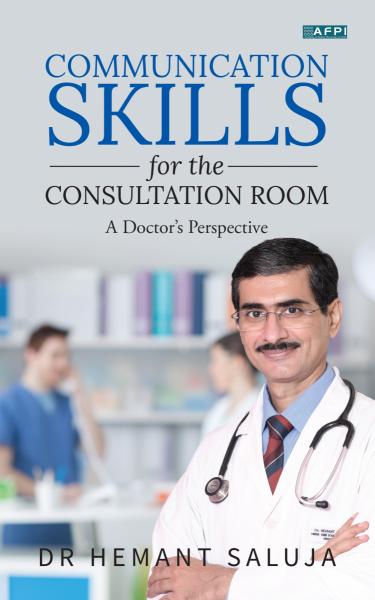 Communication Skills for the Consultation Room A Doctor's Perspective

The book is an attempt to highlight the finer aspects of the art of communication in the setting of a doctor’s consultation room. The author believes, ‘What we say is as important as how it is said.’ His 25 years of experience as a healthcare provider forms the basis of this work. The contemporary ideas of communication are also included along with the conventional techniques. The book deals with various scenarios of clinical settings encountered in day-to-day practice, from childbirth to breaking bad news, in the Indian setting. However, the concepts are universally applicable.

The narrative will make you feel as if your own experience is being shared.

The book is a must-read for all healthcare providers/doctors at all stages of the professional graph (student through consultant) to help them refine their communication skills for their consultations and perhaps, otherwise as well.

If you wish to improve your communication skills, then do read this book. This book will empower you with simple skills that will make you a better communicator and thereby, can make your consultations more effective, meaningful and exclusive.

The author completed his schooling at Modern School, Delhi, and graduated from a medical college in Thiruvananthapuram, Kerala.

He later finished his DNB in family medicine and became a member of the National Academy of medical sciences. He got an advanced diploma in Hospital Administration and a Certificate course in adolescent health, along with training in medical writing and MRCGP International (from the Royal College of GeneralPractitioners, South Asia Board) and Fellowship from the College of General Practitioners in India. He has had an unblemished career of over two and a half decades as a family physician in the Central Government Health Scheme(CGHS) of India. The author attends to anything between 6-8000 patients per year that would approximately average tomore than 1.5 lakh interactions.

He has, in his capacity as an executive member in organisations like the Academy of Family Physicians of India (AFPI), Delhi Chapter, Delhi Diabetic Forum (DDF) and Indian Medical Association (IMA-NDB), helped the community by empowering the health care providers to deliver better healthcare as per their needs.

He has also co-authored a book on the cardiovascular system by Paras Medical publisher – Cardiology: A Prep Manual.

The author is awaiting intellectual property rights for two of his works namely Patient Monitoring Tool and A Good Health Card. He has contributed articles in public awareness health campaigns on radio and print media including Indian and foreign.