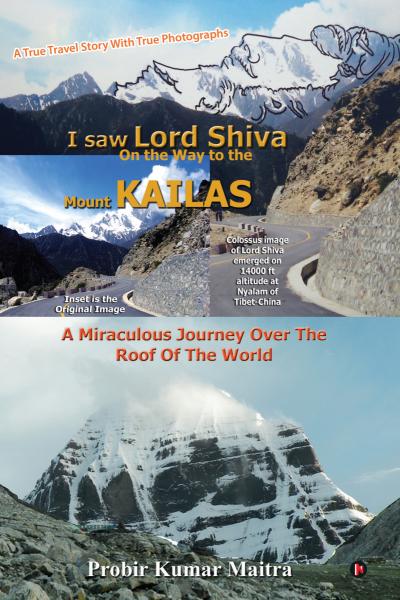 In Hindu mythology, it is believed that Lord Shiva, the God of destruction and the third of the Trinity, dwells on Mount Kailas. It is the main peak of the Gangdise Mountains of Tibet. This particular miraculous region never ceases to mystify. Saints of prominence, eminent scholars, zealous tourists, enthusiasts of nature and purposeful administrators have all visited the place since times immemorial. Many have written volumes, narrating as well as recording their myriad revelations, coupled with their experiences from their respective point of view. Most of the books available, however, are narrative in nature and not illustrative to vouch that Lord Shiva exists in this region. The Author has attempted to establish by capturing photographs that the Kailas is the holy abode of the Lord Shiva.

Probir Kumar Maitra as the Head of the Public Relations departments of the Southern and South Eastern zones of Indian Railways, came across people of varied profile. At the same time, for his extensive tour in India as well as foreign countries, he was bestowed with the opportunities of gaining profound knowledge on chequered subjects. Before joining the Railways, he had served in the Banking sector and at couple of State and Central Government Ministries and Directorates.

Apart from travel, Maitra takes a keen interest in studying the occult aspects that are prevalent in nature, human beings and places. His fervent observations of minor things help foresee future events and happenings. He believes in the theory of pre-determinism and is perceptive to nature’s blue-print. He has attained a level of proficiency in subjects like Palmistry, Numerology, Gemology and other related studies. Maitra has been acclaimed by many quarters for his expounding writings in literature, journals and other publications. Painting, illustrations, photography, videography are the other fields of activities Maitra engages in passionately. Save a few, all the photographs reproduced in this book have been captured by Maitra himself.

To establish the truth that nothing is impossible by any determined human being, Mr. Maitra had made public performances several times on Magic shows; Blind fold motor biking on busy roads, sticking objects on his bare body creating magnetic field and so on which can be viewed watching following YouTube links: