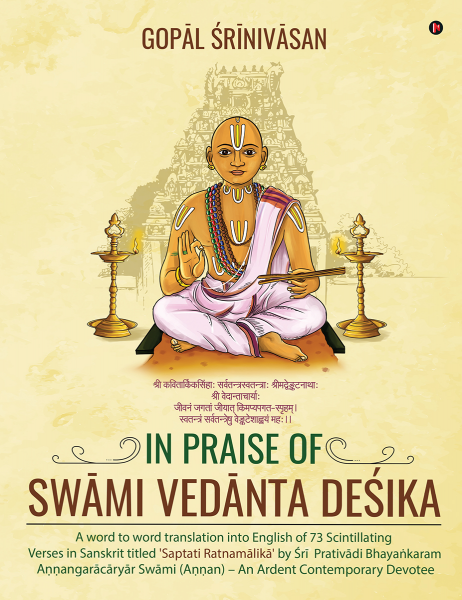 This year is the 751th birth anniversary (1268 AD- 1369 AD) of the famous poet, philosopher and dialectical genius, Swāmi Vedānta Deśika. He lived for 101 years. By the age of 20 he became proficient in all branches of spiritual knowledge. He had mastered the Vedās, Śāstrās and Āgamās and the Divya Prabandhams of the Āzhwārs. His forte was logic, poetry and philosophy.

He wrote extensively in Sanskrit, Tamizh, Prākrit and Manipravāla and composed numerous devotional hymns which reflected his poetic genius. He received the honorific titles of ‘Vedāntācāryar” from Lord Rańganāthā and “Sarvatantra Swatantrar” from the Divine Mother Śrī Rańganāyaki.

Besides strengthening and further propagating the Viśișhtādvaitic philosophy of Śrī Rāmānuja, he established beyond any doubt the doctrine of Prapatti (self surrender) as the guaranteed route to mōkșa (liberation).

This book is a translation of 73 verses composed in Sanskrit by Prativādi Bhayańkaram Aņņangarācāryār Swāmi (Aņņan) who was the disciple of Nāyanārācāryār, son of Swāmi Deśika. This ode on Swāmi Vedānta Deśika contains what needs to been known about Swāmi Deśika’s greatness, the depth of meaning in his works, the faith in him of his devotees and efforts made by his opponents to demean him which boomeranged and put such people to shame. Some of the great Ācāryās who came after Swāmi Deśika quoted several verses from ‘Saptati Ratnamalika’ in their writings and thus gave it a pride of place among other literary works.

Gopal Srinivasan (born in 1944) is a graduate engineer by qualification and a post graduate in Industrial Management from Bombay University and an industrial manager by profession. He is on the Board of Directors of a large engineering company, GKW Limited, Kolkata. Being deeply spiritual by inclination, he is also the Managing Trustee of several religious and social Trusts.

This book, which is the result of these dedicated studies, is meant mainly for those not familiar with classical Tamizh, and therefore interested in understanding the meaning of the verses in English.

Gopal Srinivasan is a regular writer on special topics of interest for senior citizens and reviews contemporary books in the monthly magazine ‘Dignity Dialogue’ published for senior citizens by Dignity Foundation, and edited by his wife Sheilu. He is also the author of a blog (www.chummachumma.blogspot.com) which he started in 2004. His favourite subject is philosophy and in particular the study and practice of Ubhaya Vedānta, the Viśiṣtādvaitic philosophy of Śrī Rāmānujā. This is the author’s second book.