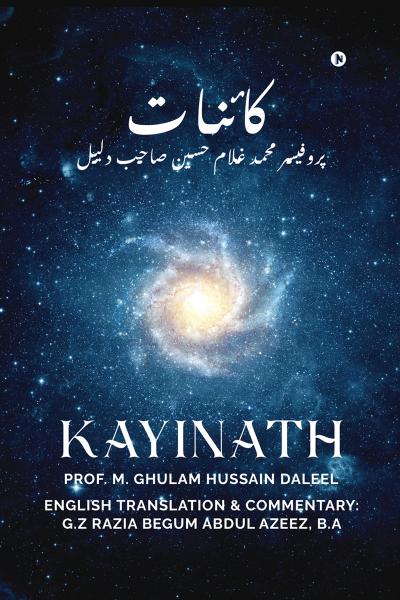 ‘Kayinath’, meaning ‘Universe’ a  collection of excellent Urdu poetry  written by Professor Ghulam Hussain Daleel, is based on Sufism, which believes in the philosophy of ‘Unity of Creations’ and this expounds that there cannot be any difference between one group of mankind and another. The criterion that should govern the relationship among human beings is  ‘love’ and there should be no place for  any hatred or discrimination.

This book authored by his daughter, Ms. Razia Begum Abdul Azeez, is a translation and exhaustive commentary on ‘Kayinath’. It was written to decipher the intellectually rich and spiritually pristine piece of her father’s magnum opus, into comprehendible message for the benefit of humanity.

This book has deep rooted Sufi Philosophy and Islamic Spiritualism which the erudite author Ms. Razia Begum has prudently thrown light on, citing relevant  reference   from the Holy Quran and sayings of Prophet Mohammed ( peace be upon him). 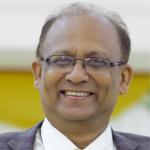 Professor Ghulam Hussain Daleel (1895 to 1957) was born on 13th March 1895. He had his education in ‘American school’ in Madurai, a town about 450km. south of Chennai. His career started with a brief stint in a government post and later as the professor of Urdu in American College, which he achieved by sheer merit of scholarship rather than with formal degrees, that he could not pursue due to burden of maintaining his family, at an young age.

He was the eldest among  the 3 sons of Janab Mohammed Ibrahim Zabiah, who was a scholar in Arabic, Persian and Urdu and a popular figure among Muslims and non Muslims of his society, for his righteousness, knowledge and wisdom.

Razia Begum Sahiba (1933 to 2006), who wrote the translation and commentary on ‘Kayinath’, was a graduate of Urdu from Nagpur University. She had such profound insight into the concept of ‘Kayinath‘ and  rich knowledge in Quran & Hadith, that she brought out a brilliant piece of literature that unravels the true essence  and message  of ‘Kayinath’.

Her work includes translation of ‘Jaffar Barmaki’, a Urdu play by her uncle Ahmed Hussain Qateel.

‘Hundred Lectures on Islamic Spiritualism’ is a voluminous priceless collection of articles she has authored.

She has also authored biography of her father and several other articles and commentaries on her father’s and Uncles’ books.

Ms. Razia Begum proved herself to be the torch bearer of the literary legacy, her father  had left behind and fortunately Daleel Qateel Jameel Foundation was established in her lifetime.

For Literature and Philanthropy