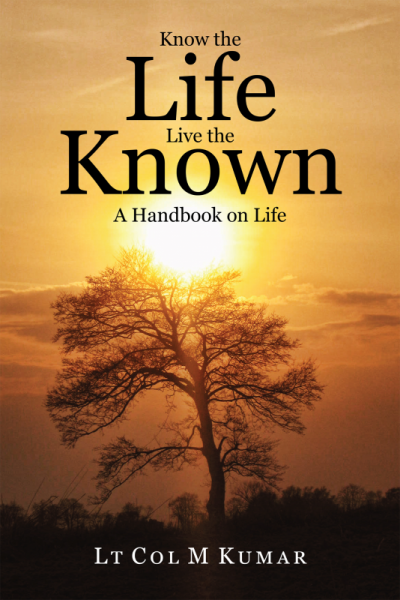 Know the Life Live the Known A Handbook on Life

Most of us in the present times find ourselves torn between the beliefs handed down by our forefathers, and the pragmatic materialism of the modern times. Is it really necessary to give up one for the other? Is acquisition of wealth and material comforts to be shunned? Is spirituality to be derided and cast off as just a myth?

Drawing deeply on the wisdom acquired by generations of both the East and the West, this book points out the practical benefits to be gained in this life itself by leading a life of spirituality, without giving up on material comforts.

A simple guide to leading a healthy and prosperous life, with good relationships at home, at the work-place, and with society at large, which shows you the advantages to yourself in developing positive attitudes, and loving relationships... In that attempt it handles both spirituality and life skills in a convincing manner that they can be easily grasped and practiced.

An excellent reference book for the young, who are looking for such guidance outside their homes, and the older generation, who are perplexed as to how to pass on their views to their wards in an acceptable manner...

An alumnus of the Indian Military Academy, Dehradun, Lt Col M Kumar, has served in the Regiment of Jammu and Kashmir Rifles of Corps of Infantry of the Indian Army in the Northern, Eastern and Western borders of the country in various capacities, and took part in operations against infiltrators and terrorists. As Training Officer in National Cadet Corps in Tamil Nadu, Karnataka and Orissa, he was responsible for developing qualities of character, courage, comradeship, discipline, leadership, selfless service and spirit of adventure among the youth of the Nation.

After two and half decades of service in the Army, he served as General Manager in private companies before joining Bharatiya Reserve Bank Note Mudran Private Limited (BRBNMPL) of the Reserve Bank of India, engaged in the Sovereign function of currency note production, where he served for more than a decade before retiring.

He is widely travelled, having visited various countries like France, Germany, Italy, Switzerland, Belgium, Netherlands and Sweden during the course of his official duties.

The author is a vivid reader of self-help and spiritual books and a freelance trainer. He has a strong inclination towards spirituality. The author is a Grand Master in Reiki and a trained healer in acupressure and the vibrionics form of homeopathy. He has undertaken pilgrimages to Amarnath, Bodhgaya, Manasorawar and Mount Kailash.