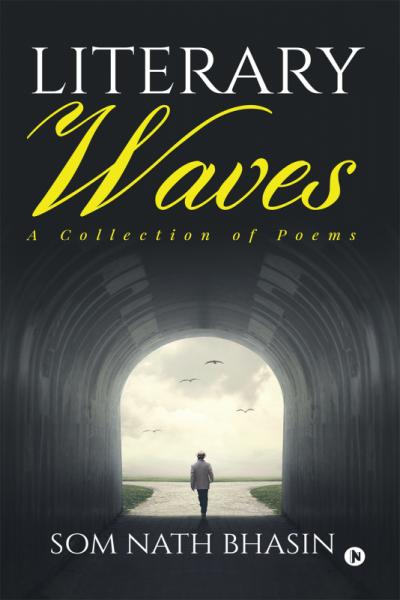 Literary Waves A Collection of Poems

Literary Waves is an inspirational journey to give expression to the imagination, to invoke the love and longing of the keen readers of poetry, with all its metaphors and similes, more so, the rhyming, all encompassed in it.

The euphoria of the rising sun, the elegance and the broad smile of the sunflower, the elation of the wedding glitz, the passion for sandy beaches, have all been woven with the intense love for poetry in the Literary Waves.

I am sure the readers would find this compilation very interesting and would love going through it from the beginning till the end, to fill their leisure hours with pleasure.

Som Nath Bhasin was born in Peshawar in 1941. He and his wife, Mrs. Chanchal Bhasin stay in Gurugram (Haryana). He served the government till his retirement in 2001.  He married in 1970 and his three daughters are married and permanently settled in Sydney (Australia).  Hence, he and his wife often visit Australia to be with their daughters and grandchildren. After his retirement in 2001, he felt that there was enough time at his disposal and hence decided to write poetry.  His wife, daughters and sons-in-law encouraged him to write poetry as that would greatly help him spend his time. Frankly speaking, he never ever thought to make writing a business.  It was only in 2016-17 that he started writing poetry.

He penned down these verses so that he could reach out to readers, as he believes that his readers would like to read his poems and benefit from them.  He feels confident that the fusion of traditional and contemporary poems would immensely interest them.  Poems such as ‘Magnetic Pull’, ‘Wedding Glitz’ and ‘The Pensioner’ and ‘Fleeting Moments’ will find favour with the readers. The author believes that he has given expression to his imagination through his poems.  He is of the view that he has used metaphors and similes where thought prudent.  Rhyming, which the author believes is the heart and soul of poetry, has been taken due care of.  There are quite a few poems which depict our proximity to nature, such as ‘Melodious Tunes’, ‘Sea Beaches’, ‘Magnetic Pull’, ‘The Sunrise’.   The author is confident that through Literary Waves, he would be successful in reaching out to his readers and would be encouraged to bring out more books.