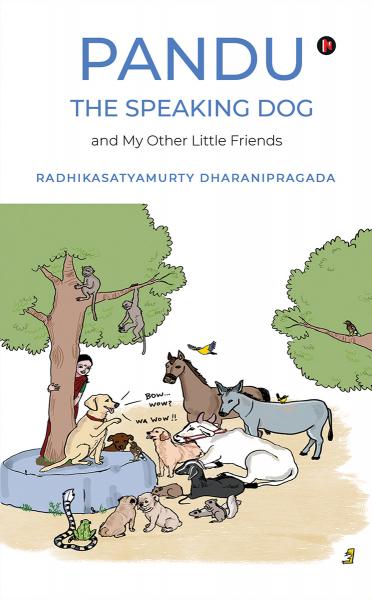 Pandu, The Speaking Dog And My Other Little Friends

The book is about my experiences with my pet dog and other little animals. I have shared my insights on pet dogs and other animals, my tryst with anti-animal abuse and my anguish over the inhumane ways humans treat animals.

RadhikaSatyamurty, a home maker, author, poet, singer is passionate about animals and their welfare. Living in Bangalore now and involved in helping the stray animals in distress.  She does reaches out to any organisation that needs her contribution. Be it ‘Missionary of charities’ started by Mother Theresa, orphanages, animal shelters and old age homes.

When she was young, her family lived in several places due to her father’s transferable job as an Engineer in irrigation department of Andhra Pradesh government. She says that living in different places every 2 or 3 years and getting used to new places, culture, education has enriched her horizon of thinking and vision. She did her degree in English literature and had a diploma in journalism, and a PG diploma in advertising and marketing, but remained as home maker taking care of their two daughters, after her marriage with an Indian administrative officer in 1985 and relocated to Karnataka. Here also she had opportunity of living at different places, which she feels as “practical education”.  After all this she found out that her social responsibility is to help stray animals in distress. She is now completely involved in stray dogs’ welfare., rescuing the needy animals, finding out homes for Indian dog puppies, get them vaccinated, neutered and others like reaching out to animals, victims of hit and run cases.

Radhikasatyamurty dreams about a cruelty free world which would be possible by introducing humane education in school children’s educational curriculum. She herself so far had 40 pets in the last 35 years plus. She says she has her husband’s and their two daughters’ support in whatever she did and considers herself ‘lucky’.