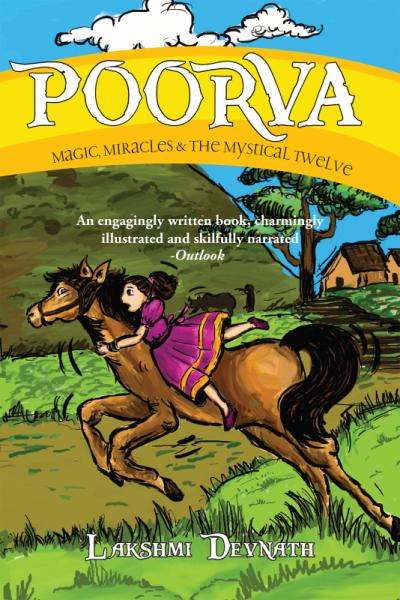 Wrapped up years roll themselves out as eleven-year-old Poorva whisks through centuries to enter the bygone era of twelve Vishnu devotees of South India, collectively described as the Azhvars. The miracles that she witnesses in their lives leave her speechless while her own journey has her bemused. She finds herself walking through solid walls and riding limpid clouds. Animals and birds offer her company. A Wishing Food Tree floors her with its sumptuous fare of delectable dishes as does a worm-bird by its generous offering of a beak-ful of worms! Cruising through these adventures Poorva gets to experience events of different hues from the lives of the Azhvars. She is mesmerized by the marriage of Andal with Lord Ranganatha and shaken up to see a bankrupt king turn to robbery before his final transformation into an Azhvar.

Poorva—Magic Miracles and the Mystical Twelve is a breathtaking adventure woven around the stories of the Azhvars, using the strands of mythology, fantasy and history.

aspects of Indian culture. She has commendable knowledge of Sanskrit as

well. Her deeply-researched articles find a place in prestigious publications

such as The Hindu, Sruti and Sri Nrisimhapriya. Her body of work includes

such diverse subjects as composers of Carnatic music, texts on Indian

music philosophers and saints of India, and the Vedas, among others.

cultural heritage through innovative and exciting writing that appeals to

their lively imagination. To this end, she has authored Sargam, a series of

short stories that unveil milestones in the evolution of Carnatic music,

and Poorva: Magic, Miracles and the Mystical Twelve, a contemporary

retelling of literary hagiology. Her ongoing graphic series on Carnatic

music legends, endearingly titled Pictures of Melody, is another path-

Lakshmi’s other books include A Class Apart, the biography of

Romantic: The Musical Journey of Lalgudi Jayaraman. Both became runaway

successes, requiring multiple reprints. An Incurable Romantic was sold out

even before the official book launch.

diverse age groups has won her wide admiration. She is currently engaged

in penning the much-awaited Poorva sequel, Poorva in the Vedic Age.