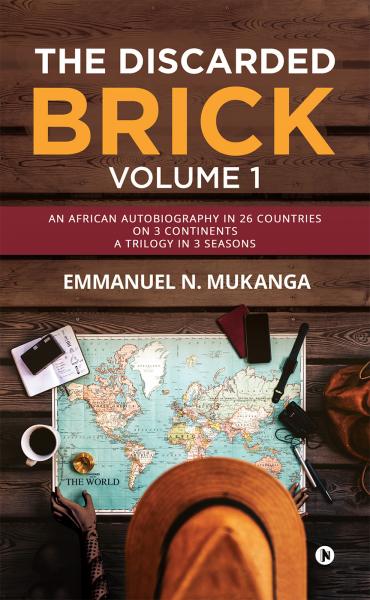 The Discarded Brick - Volume 1 An African Autobiography in 26 Countries on 3 Continents. A trilogy in 3 seasons

The discarded brick, a three season trilogy, in two volumes, is set in Africa, Europe and North America. It is about the travels and experiences of Emmanuel N. Mukanga who even in childhood, would be moved to a different location every three to five years.  Born in the British Protectorate of Uganda, the changing political and economic fortunes of his post-independence homeland and region led to thousands of his country people to flee and go look for greener pastures all over the world. This desire for a better and safer world, is a human desire, and in Europe and North America, Emmanuel found people from other countries, in pursuit of happiness. Back home, not everyone was happy to co-exist with him. Fears and intrigue led to a family split, legal battles and irreconcilable differences. He and his siblings became a pariah to be avoided like the pest.

One of the reasons Idi Amin gave for expelling the 80,000 strong Indian Community from Uganda in 1972, was that, “they were milking the cow without feeding it,” which was not entirely true. He, who had no cow to milk, did not know that he too would have to leave his country of birth. Born in 1953, near the shores of Lake Victoria in Eastern Uganda, Emmanuel N. Mukanga was plucked from his parents at the age of three and taken to the Ugandan capital, Kampala. At age six, he was taken to a primary school near Mbale in Eastern Uganda and at age nine transferred to Entebbe, a former seat of the British Protectorate Government. At 13, he joined a boarding secondary school, after which he went to University to study the Arts.

He worked at Uganda Television, but in 1976, he fled Idi Amin’s Uganda, starting an odyssey that would take him to over 26 countries in Africa, Europe and North America. He interacted with many cultures, however, when it came to a denigration of his culture at home, then a clash was inevitable. This awakened in him the questions, “Who are you? Where do you come from? What do you stand for?” Cultural clashes, intrigue and legal battles followed. He has included an epilogue reflecting on his life and existence and tracing his origins among the Samia-Luhya, astride Kenya and Uganda. He started compiling this book in May 2009 and completed it in October 2020 during the great COVID-19 pandemic, and after George Floyd said 12 times, in less than 9 minutes, “Mama, I can’t breathe.”