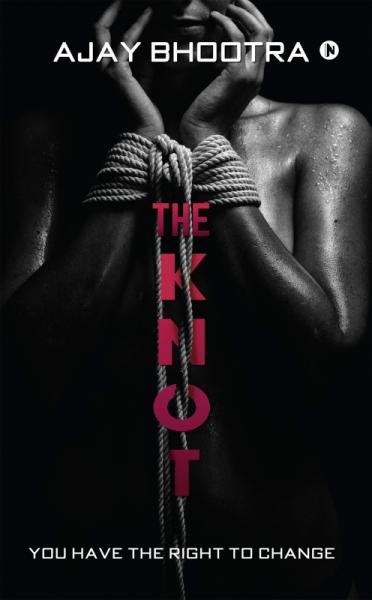 The Knot You Have the Right to Change

Romantic, liberating and mesmerizing, a story that will obsess you

Rhea is a fiercely independent, hot and extremely beautiful girl. When the cocky Ronnie sees Rhea in college for the first time, it sparks a sensual affair at once. He falls outrageously in lust with her.

An obsessed Ronnie will do anything to possess his crush. But when he comes in front of Rhea, his rakish style vanishes and he turns meek and submissive.

Rhea tries to keep a distance; it only makes him want her more. As time passes, the crooked and conceited Ronnie gets puzzled. Something about her affected him deeply but the situation has haunted him ever since.

Will Ronnie be able to get his crush?

Will Rhea be able to save herself from him?

The Knot is a gripping tale of passion, lust, and ambition. It delves deep into inner conflicts and showcases the impetus to choose the road less taken and propagates an idea that looks relevant in the modern times.

Warning: This is a romantic and totally addictive novel. All readers should be at least 18+!

Ajay is an Optometrist, author and dreamer. His first book on optometry titled Optician’s Guide was published in 2006. The book quickly got the appreciation with optometry institutes accepting it and students benefitting from it. The success of his debut book encouraged him to take up writing on a more serious note. Thereafter he wrote 7 more books on optometry. Recently in the year 2019 one of his optometry books titled “Basics of Computer Vision Syndrome” has been translated into Arabic Language by King Saud University, Saudi Arabia.

In addition, he has also authored a fascinating non-fiction, The Race for Space – The Art & Science of Retail Selling, which explains the nitty-grittys of retail selling and salesmanship.

In the year 2013, he ventured into writing fiction, a dream that he had been nurturing ever since he started writing. He wrote a romantic novel titled Yet We Marry. The novel received a lot of appreciation for its simplicity, naturalness and candidness, and opened to positive reviews on Amazon.

Ajay has deep interest in romantic erotica genre and he has a plan to write more fictions in this genre. Besides, he has got enormous amount of experience on various facades of business which he would always like to share with masses through the medium of non- fiction books. Currently he is also working on a non-fiction title, A Journey without Destination.

Ajay lives in Kolkata and is working with one of the biggest optical retail chains, Himalaya Optical.

To know more about Ajay you may log on to www.ajaykrbhootra.com.