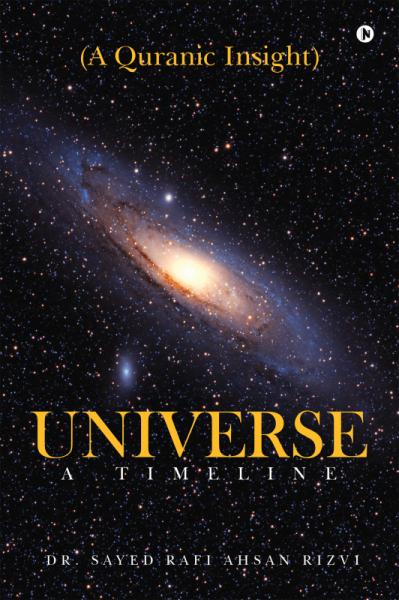 Universe – A Timeline  A Quranic Insight

The scientific explanation of the origin of the Universe is that of a Big Bang. However, The Quranic verses indicate that the universe is an "uninterrupted sequence from origin until the end" within a specific time span. The verses further reveal that everything in the material universe is inter-connected through "tracks and pathways" (possibly providing for instant communication and travel), and could be the same as 'wormholes' that scientists speak of.

As commonly understood, the human body is a part of earthly evolution (created from clay). However, The Quran states that the infusion of ‘Nafs’ in the mother’s womb transforms the foetus into a ‘human’ much before birth (V. 7; 172). “The similitude of Jesus before Allah is as that of Adam …” [V. 3; 59], declaring that Adam (AS) too had a mother, but no father. Possibly, Adam (AS) and Eve (AS) were born to different Neanderthal females (humans share 4-5% DNA with Neanderthals). And, God bestowed Adam (AS) and Eve (AS) with only two sons. How did the human race proliferate? – Read inside for an explanation backed by Quranic information.

Genome analysis indicates that human inter-breeding with Neanderthals created the Denisovan group. Only a few offspring received 'Nafs' from God to be human while the remaining were eliminated by Noah's flood and the passage of time.

God’s each Day worked out from The Quran– equals -- 1.15 billion years

(Science estimate is on higher side, a re-look needed by Scientists)

This book presents God’s Grand Design as a continuous sequence of His Governance of the birth, development, retreat and death of the universe and all matter, inanimate as well as animate.

At the young age of 12, a village boy Rafi Rizvi, was captivated by the spectacular brilliance of countless stars on a moonless night. At the time, everyone stated they were a mystery of nature. His subsequent desire to explore the unknown, led him to study geology, in order to acquire scientific knowledge of the Earth and the universe.

However, his curiosity surrounding that sight of the night sky still remained unsolved. To his astonishment, he found most answers in verses of The Quran, Thus, he was able to build ‘God’s Grand Design’ of the universe, which attempts to solve most of these mysteries.