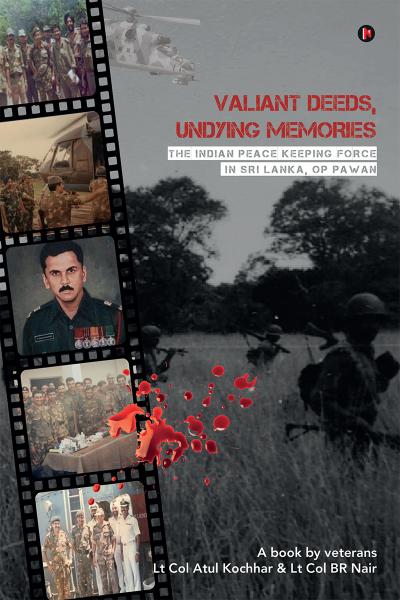 The 32-month tryst of the Indian Peace Keeping Force with LTTE in Sri Lanka, between July 1987 and March 1990, was the first out-of-country overseas assignment since independence for the Indian Armed Forces under the national banner.

For the soldier who laid down his life and limb, all wars are the same. The ‘IPKF syndrome’ has been casting its long melancholy shadow over decision-makers ever since the withdrawal of this force in 1990. The book recounts real-life accounts of veterans who fought a grim battle, largely forgotten by the mainstream and a thankless establishment. What was the politico-military aim of the government, and was the Indo-SL Accord watertight in its scope? Was timely intelligence shared with the troops who were launched into battle? What were the feelings of the soldier towards the involvement of IPKF fighting someone else’s war? Were the soldiers given their due? What were the tactical errors committed by the IPKF? These issues are highlighted in these interesting and gripping personal accounts of the veterans.

“I hate the drums discordant note

Parading round and round

To thoughtless youth it pleasures yields

And lures from city and fields

To sell their liberty for charms

Of tawdry lace and glittering arms

And when ambitions voice commands

To march and fight and fall in foreign lands”

Lieutenant Colonel Atul Kochhar, MSc (Defence Studies), PGDM, was commissioned into First Jammu and Kashmir Light Infantry in June 1986. He is an alumnus of NDA and DSSC. He was part of his unit in the Indian Military Training Team (East), Bhutan, for imparting training to the Royal Bhutan Army. He has served in all major areas/theatres of operations, including Op Chequerboard, Op Pawan, Op Parakram, Op Rakshak and Op Vijay. He was posted in Jammu and Kashmir Light Infantry Regimental Centre as a Training Major, DAQMG of 123 Infantry Brigade in Op Vijay, and as an Instructor in NCC Officer Training Academy Gwalior. He fulfilled his Executive MBA from IIM Indore in 2007. He is settled in Noida and can be reached out at armyuncle@gmail.com /atuljingles@yahoo.co.in.

Lieutenant Colonel B R Nair was commissioned into the Regiment of Artillery (Field Wing) after graduating from the Centre for Russian Studies, Jawaharlal Nehru University, in September 1974. He is an alumnus of the Officer’s Training School, Madras – now the Officer’s Training Academy, Chennai. One of the last artillery officers to be commissioned into a Mountain Pack Regiment being reorganised into what later came to be known as the ‘Light regiment’; he was transferred to the Intelligence Corps, after a stint as a General Staff Officer Grade 3 in the Military Intelligence Directorate of Army Headquarters. Subsequently, he served in counter-insurgency operations in the North East (Mizoram & Agartala), in intelligence gathering operations on the Western borders, counter-intelligence operations in Central India, as a Staff Officer Grade 2 in Military Intelligence Directorate, and as a Grade 1 Intelligence Staff Officer, in a corps headquarters on the western border.