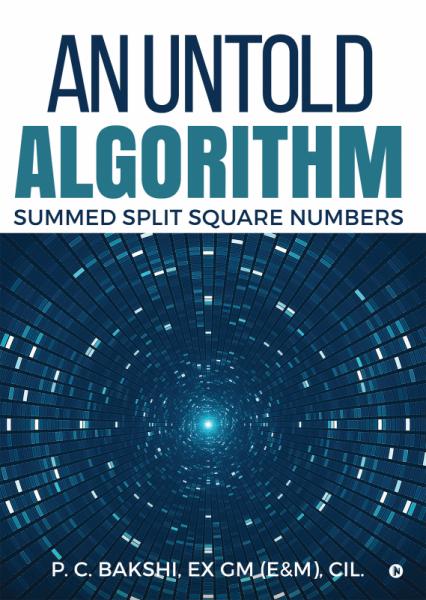 It’s time to uncover an undiscovered aspect of Algebra.

This book will introduce the world to an entirely new concept and theorem on a special type of numbers. We have all studied in our Mathematics classes about odd numbers, even numbers, prime numbers, composite numbers, perfect numbers and such, but never thought the following type of numbers would exist. Named Summed Split Square Numbers or SSS Numbers, this concept talks about when any number, once squared and then split into two equal halves, and after adding, will give you that original number.

Do we know how many such numbers exist in the universe? The answer is, infinite. Another interesting fact about SSS Numbers is that these exist in pairs, which makes them different from other type of numbers.

Do we know why? The mystery will be resolved in this book where such fascinating facts and numbers are being dealt with, including the author’s derivation of the formulae as well as some work on a method introduced in this book to describe the numbers with repeated digits, which may open new horizons.

P.C. Bakshi hails from a middle-class family. Being the second-born in a family greatly interested in numbers, he developed a lifelong love with Mathematics. After completing his post-graduation in engineering, he started his career with Coal India. Even at this time, he used to spend all his spare time, if he got any, to solve mathematical and logical puzzles published in a reputed newspaper’s brain-storming column. He always had a desire to excel in numbers, and take the subject the numbers to a different dimension. After retirement, he decided to actively pursue his passion and this book is the result of two years of hard work and dedication to his first love, the discovery of “untold numbers” for this world.