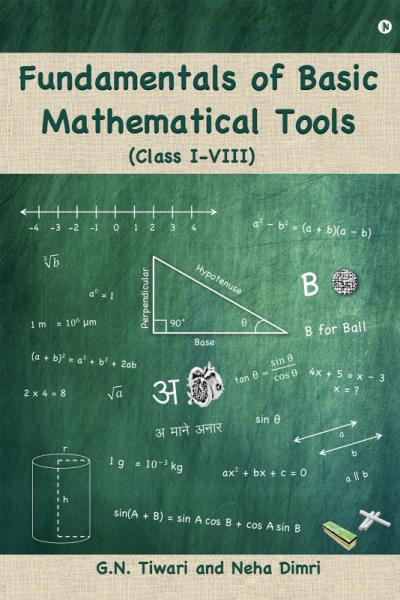 Just like how you can't build a great building on a weak foundation, in order to nurture the great minds of the future, a better grasp on fundamentals is needed. Fundamentals of Basic Mathematical Tools (Class I-VIII) provides students with all the resources required to build a better grasp on mathematics. This booklet includes a detailed explanation of the basic concepts of mathematics such as multiplication/addition of signs, solving signed ratios, moving variables across the equal to sign in equations, discussion on roman numerals, conversion between units, solving for trigonometric ratios and many other areas which children find troublesome. Mathematics is perceived to be tough by kids but all they need is a better understanding of the basic concepts involved in the subject. The main objective of this book is to encourage students to pursue mathematics in higher education by helping them understand their fundamentals properly.

Professor Gopal Nath Tiwari, from Ballia (UP), India, received his doctoral degree in 1976 from the Banaras Hindu University (B.H.U). Since then, he is working at the Centre for Energy Studies, IIT Delhi. During his lectures, at UG and PG level, in IIT Delhi and interactions with various students, he noticed that there was a dire need for clarification of several basic concepts associated with elementary mathematics. To his credit, he has published around 600 research papers, 25 books and supervised more than 80 Ph.D. students in renewable energy sources. He is a co-recipient of the “Hari Om Ashram Prerit S.S.Bhatnagar” Award in 1982. He is also a recipient of a European fellowship in 1997 and visited the University of Ulster (UK) in 1993. In addition, he was also nominated for an IDEA award.

He holds the position of Editor-in-chief, Editor, Associate Editor and is a reviewer for many international journals. Professor Tiwari has been conferred the “Vigyan Ratna” by the government of U.P, India on March 26, 2008 and the Valued Associated Editor award by the J. of Solar Energy. He is also a recipient of lifetime achievement award by ISAM organized by KNIT Sultanpur in December, 2015. He is also the founder-President of the Bag Energy Research Society (BERS: www.bers.in), which is responsible for energy education and basic education in rural India.

Neha Dimri completed her schooling from Bal Bharati Public School, GRH Marg, Delhi. Thereafter, she pursued her B.Tech in Computer Science and Engineering from Indira Gandhi Institute of Technology, Delhi and M.Tech in Software Engineering from Delhi Technological University. Currently, she is pursuing her Ph.D. from IIT, Delhi. Her experience from primary schooling, along with Prof. G.N. Tiwari’s primary education at Ballia (UP), has played a very important role in the development of this book.