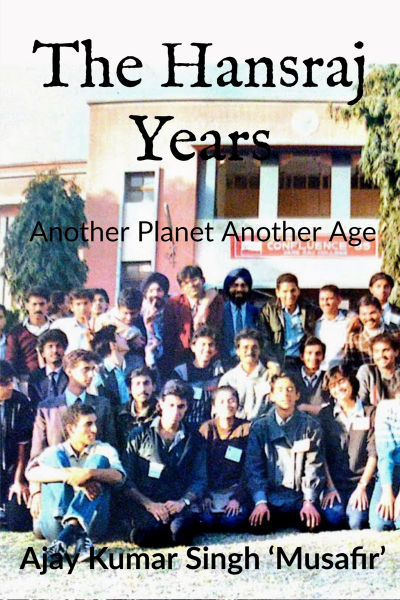 THE HANSRAJ YEARS Another Planet Another Age

Where are you Musafir these days

A jug of wine has come my way

A drink with you is due

We shall drink to the good old days

To sincere and some wayward ways

And to our irreverence

There was no sorrow nor was pain

Only a bag of hopes

Hurdles were crossed with sweat and strain

And victory at the ropes

We all were young and had no clue

What would happen in life

The skies were clear and heavens blue

That was enough for life

Each day was consumed with pleasure

One day each at a time

There was no rush, time was treasure

Each hour was given time

To have fun needed no reason

For that there was no plan

There was no restricted season

Friends made a happy clan

There were no fears or faith in stars

Work was not discomfort

Through stormy seas we captained fate

As masters of our soul

We are steering our own fate 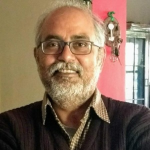 Ajay Kumar Singh 'Musafir' is a poet who prefers and promotes the rhyming verse format. Born to Draupadi Devi nee Rai, from Khajraitha, Bihar, and Arjun Prasad Singh of Olipur, District Lakhisarai, Bihar, he studied in Bethany School, Darjeeling, St. Josephs College school Darjeeling, and DPS Mathura Road, New Delhi. He  graduated from Hansraj College, Delhi University (1984-1987) with a BA (Hons) in History and did his post-graduation from JNU, New Delhi (1987-1993) with an MA and an MPhil in International Relations. Thus during his formative years he was in exile from his beloved home Neel Kothi, Lakhisarai. Hence his intense longing for his hometown - Lakhisarai.

His literary journey was ignited by the two masters of Urdu Ghazal poetry, first by Meer Taqi Meer and Ghalib when Sanjeev Ranjan, raconteur par excellence, a friend and a mentor, took the trouble to explain Urdu ghazals, which till then was an insurmountable wall. This simply opened the floodgates. His other influences were William Shakespeare, William Wordsworth, Sir Walter Scott, Kabir, Tulsidas, Abdur Rahim Khan-i-Khanan, Rabindranath Tagore and Bollywood.

Indian History has been a passion ever since he began to understand its dynamics in the third year of his honours course in Hansraj College.

He is currently a Civil Servant, resident in Gurgaon.