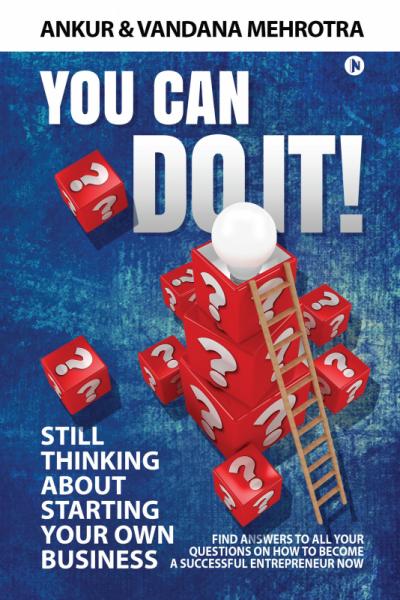 Are you an aspiring entrepreneur, but bogged down by questions like Why, What and How to start your own business? Well, You Can Do It is a step by step guide to take you through key decisions before and during your entrepreneurial journey. Packed with insights, business hacks, strategies, case studies and best practices, this book is a must-have for first generation entrepreneurs who understand that success comes from constant learning – not just from mistakes but also from the success stories of others. How?

Neatly divided into ten chapters, the authors compel the readers to move beyond the ordinary to newer, unexplored targets. Chase your dream; be your own boss and create wealth pipelines to boost passive income for future generations. It is a ready reckoner of not just tips and tricks, but also oft-ignored, yet highly important issues like selecting the right business location, operational challenges and effective way to use social media marketing. That’s not all. An entire chapter is dedicated to starting a business while still working which can create parallel incomes for you and your family.

Grab your copy now to enter the entrepreneurial world with poise and élan. After all, success in business cannot be achieved with a management degree alone.

Ankur and Vandana are successful serial entrepreneurs who believe in unlocking common potential to create uncommon results and look forward to creating new products that will contribute towards the creation of a better society.

They have launched diverse entrepreneurial ventures – Meteonic Innovation (IT consulting) -2006 (which featured in an episode of CNBC in 2009); Hobby Studio (a social venture) - 2008, Exclusive Diamond Jewellery (Retail outlet) - 2009, Food and Beverage - 2012, Gifting boutique - 2013, Apparel and Textiles - 2014. In a period of ten years, they have boldly ventured in to six diverse businesses; some failed, some sold and some successfully running.

At present, they intend to enable, empower and encourage philanthropy via a mobile app named GiGa (Giver’s Gain). Also Giga is a unit prefix in the metric system denoting a factor of a billion and they believe GiGa has the potential to impact billions of lives.

Ankur is a postgraduate from IIT Delhi and has filed four patents in the mobile phone domain while working at Motorola. Vandana, an engineer has diverse experience having played key roles in Product and Program Management, Operations, Sales and Marketing. She is referred to as a system breaker and an idea generating machine.