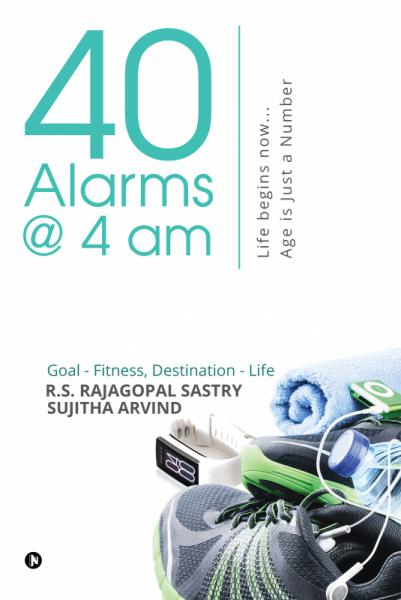 Find yourself in this tale of Joan, a Nursing Officer from the US Army, as she travels across geographies and entwines herself in the rich culture of a land not her own.

This is the story where she finds the elusive peace and solace through the people of this land, whose native intelligence make it simple and natural.

It is a story of people trying to find a purpose to pursue as they realise that they possibly are trying to fill emptiness with emptiness.

It is a story of people who realise, with Joan, that the pursuit of fitness can encompass and embody every kind of a purpose one needs in life.

It could be your story too. If fitness is your supreme purpose, all the dreams you want to come true become incidental.

Raja, while he was still trying to understand his teenage self, became a soldier in the Indian Air Force. His eleven years as a soldier made him travel across the diaspora of the country, while he pursued his education and became an avid sportsman, even representing his basketball team. He left the Air Force before his term to make a start in the corporate world in which he handled diverse functions, quickly growing to be a Chief Financial Officer of a large technology major. He deftly handled his corporate commitments, always excelling, while he never compromised his physical time, as he calls it.

In his life as a civilian, he earned a black belt in Goju Ryu style of Karate, is an avid cyclist, runner and claims he has not lost any of his flexibility and fitness. His constant pursuit to understand himself gave him an innate ability to understand people around him. He often expressed deep thoughts through his poems and well thought out articles. His love for life, for people and for writing lured him into authoring this book with his co-author and friend Sujitha.

Sujitha Arvind is an architect by profession. When her creative writing skills overtook her passion for architecture, the author in her was born. This is her second book. Her first book, Mystical Healer, is a tale of passion and self-discovery.

Her compelling urge to reach out to the souls of people and create romance and success in their lives, and her bountiful experiences as an architect, an ultra-marathon runner, a cyclist and a trekker, kindled in her the desire to write a book that would inspire others. Her very staunch belief in values like trust and honesty in relationships, which lead to happiness, are strongly expressed in all her books.

The story of her second book is a derivative of her deep experiential evolution as a fitness enthusiast. Her intent is to stir up an interest in fitness through inspirations from experiences of friends and acquaintances, who have paved the way to better living, following the path of fitness. This book, though rooted in modern India, also reflects Sujitha’s love for the history and culture of the country. The rich values of tradition and beliefs of this ancient country and their influence on the author's thinking is evident in the deep spirit depicted by the main characters in the story.

Her next two books, Mystical Spaces and Alter Ego, are in progress to be published soon.