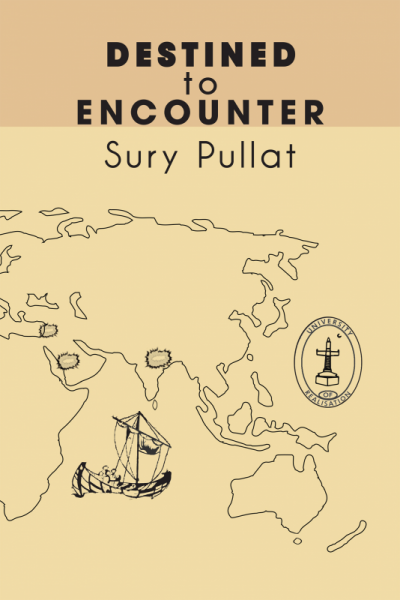 Sury Pullat, an ex-mariner uses his international characters with varied backgrounds to probe the depths of Jihad. Two step-children at the Afghanistan-Pakistan border embark on Jihad to set right problems that span within and across religions. They confront the author himself as to why they had been chosen for such a task. It leads to a philosophical and historical analysis of most matters that cause disputes, identifying religion as the underlying problem in most cases. And when money, power and religion come together the trio makes such a strong brew that common sense is crucified at the altar of violence.

The story traces the arguments for and against Jihad. Their induction, training, practice and failed misadventures are well narrated. Eventually, they join the main activist groups, multi plying numbers and widening their reach so as to impact most of the world in one go. Nature gets upset with the goings on in the world and unleashes her corrective fury.

Sury Pullat, sixty three, is an ex Merchant Navy Captain settled in Chennai, and has been a columnist and an essayist. He ventured into books with Shipping and Law –A Handbook in 2011 and followed it up with a novel in 2014, Destined Encounters –A Philosophical Novel. Destined to Encounter is the sequel. As a professional consultant, compiling information and finding solutions to problems had been his forté. His skills are brought into committed writing, seeking to solve the insurmountable problems that bedevil the society in our time, despite the progress made on many fronts.

He is a social activist on many forums like crusading against corruption for ushering in fast changes. By profession he is an arbitrator and an independent director. Being academically sound, he brings in streams of knowledge and substantiated arguments into the ideas he proposes, pursues and pushes through his writings.

Having retired from his previous work and after becoming a grandfather, his efforts have been focused on what legacy can be left behind for generations to come. As such, his message to everyone, through his books, is to cause the right change in any way possible under the dictum lead, follow or move.