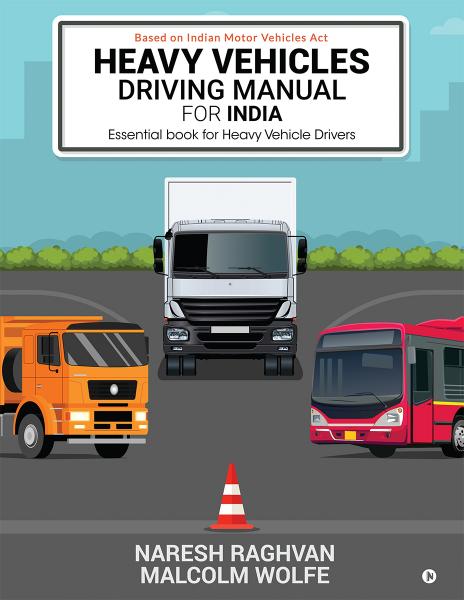 Every year more than 1.5 lakh lives are lost in India due to road accidents. According to the Ministry of Road Transport and Highways, 80% of the accidents are due to driver error. The driver error rate is so high in India because most drivers do not know even the basic road rules. Heavy vehicle drivers have additional responsibility toward safety as they drive larger vehicles and carry valuable cargo. This book can impart critical driver education on road rules to heavy vehicle drivers thereby reducing accidents and vehicle downtime. This book is intended for drivers of lorries, trucks, buses, tankers, medium size trucks, etc. This book is also available in other languages.

Naresh Raghvan is a mechanical engineer and MBA with over 35 years of driving experience across 8 countries. His engineering degree combined with the experience of running a car garage in Hyderabad in his youth helped him understand better the physics of driving.

He has driving licenses from India, USA and Dubai and has deep knowledge of road safety. He has driven extensively in many states of India and understands the ground reality of Indian road conditions.

Naresh has undergone several advanced training from the USA in car and motorcycle driving safety. He believes that we can improve road safety in India by ‘driver education’ and has written driving books to help drivers. He lives in Hyderabad.

Sqn. Leader Malcolm Wolfe (Retd.) was born in Jabalpur, India. He graduated from Osmania University, Hyderabad, in 1978 and was commissioned as a pilot in the Indian Air Force (IAF) in 1980. After flying over 3000 hours, he retired from the IAF in 1993 and moved temporarily to the UK.

In the UK, he served in the police force in London, where he gained knowledge of crime prevention, traffic laws and enforcement. He is widely travelled and has driven in Europe, the Middle East, Australia and the USA and has gained first-hand experience of different traffic systems. In 2007, he published a driver’s handbook called ‘Streetwise’.

In 2014, he returned to Hyderabad to dedicate his time to improving the traffic condition in India. He now runs an NGO, Roadkraft, and a driving school to train drivers to international standards. He aims to save lives by teaching driving, as a social activity, in a safe and disciplined manner.