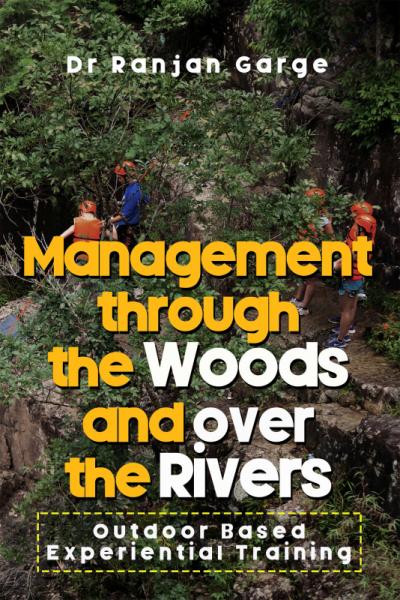 Management Through the Woods and Over the Rivers is based on Outdoor Based Experiential Training Programme (OBET) or Outdoor Management Style, which speaks of twenty-five years ahead of time. The objectives of Outdoor Management are elaborated in depth and a case study based on the experiences of five selected industries is presented in this book. This book elaborates on how to evaluate the leadership quality, system problem solving ability, experimentation, learning from past experiences and transferring knowledge.

A model of OBET that catalyses the process of learning in more than twenty-five companies in India, including Aurangabad, Pune and Mumbai through the author’s consultancy services COSMOS Outward Bound Pioneers, India, an NGO, has also been discussed in this book. The advantage of OMD is that it is away from the pressures and inhibitions of day-to-day work. The last chapter is supported by meaningful models on future vision and taxonomy of thinking.

So, are you ready for the Change?

Dr Ranjan Garge – Director, COSMOS Outward Bound Pioneers, Aurangabad – is a microbiologist, journalist, mountaineer, environmentalist, educationist, social worker and outdoor management expert. A prolific writer, he has written fifteen books on popular science, management and adventure. Dr Garge’s book on mountaineering received the Best Literature Award instituted by the Government of Maharashtra in 1993. He is the recipient of the Best Science Propagator Award in the All India Marathi Science Congress. Ranjan is also the President of Marathi Vidnyan Parishad and Indian Society for Training and Development, Aurangabad Chapter.

Ranjan is in the field of management consultancy for last fifteen years. He worked as the Director of the Pre-IAS Training Institute, Aurangabad (2004–06) and retired as the Principal, Government College of Arts and Science, Aurangabad (2011). His core training areas include Outdoor Management Development (OMD), Science of Change, Environment Management system. He conducts a faculty improvement programme known as “THINK CRAFT.” He gives motivational talks and conducts workshops on soft skills.

Widely travelled abroad, Ranjan stands listed in Reference Asia and World’s Who’s Who. He is the recipient of Rising Personality of India Award instituted by Penguin Publishing House and Bharat Gauraw Award of Industrial Economic Forum of India. He stands awarded the Lokmat Gold Medal for Journalism. Ranjan is the Charter member of Rotary Club of Aurangabad East (1985-86) and was the Assistant Governor from 2005–06. He is also the recipient of the Presidential Citation Award of Rotary International (1988).