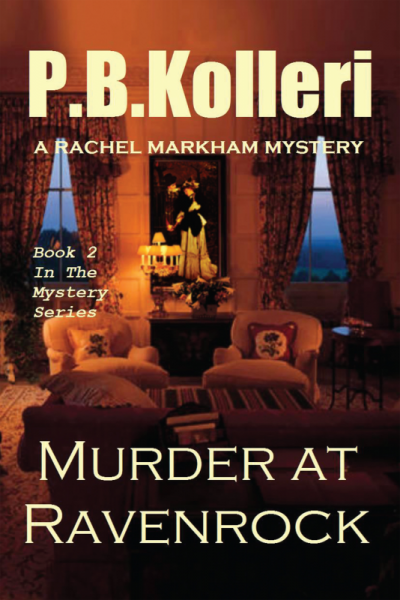 From the bestselling author of Murder at Rutherford Hall, comes the second book in the Rachel Markham Mystery Series.

Sofia Burnett, the beautiful American actress, married to the British millionaire - Henry Cavendish, spoke up, as if coming out of a daze, ‘My God! There really is a lunatic about. And from the looks of it, he’s trying to wipe out the family, up at Ravenrock, one by one.’

When a spate of baffling murders, rock the charming albeit sleepy town of Dartmouth, in Devon, Rachel and Jeremy, must go all out, to unravel the mysterious deaths, and unmask the ingenious criminal mind behind them.

Set in 1947, England, Murder at Ravenrock is an intriguing sequel to PB Kolleri’s first book, ‘Murder at Rutherford Hall.’

P.B.Kolleri is the author of the Rachel Markham Mystery Series, which is a series of entertaining whodunits set in the post WW 2 era.

You can now connect with the author on facebook at www.facebook.com/pbkolleri