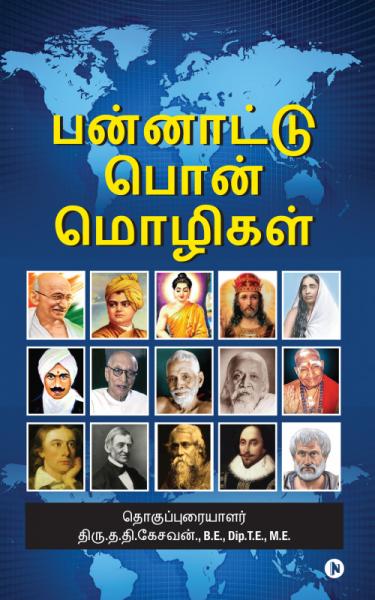 Basically this book is the back thinking of the Author. It contains GOLDEN SAYINGS of scholars and Leaders of India and, Poets, Philosophers and famous writers and worldwide renowned experts in various fields. The author has collected about 1905 Golden Sayings of 473 eminent and intellectual and world thinkers which will be useful to mankind in particular and Society in general.

In summerising and compiling all these quotes in the form of a booklet, the author has sorted out and grouped them under different heads, 99 in number, covering a wide range of topics of ones like Love, Discipline, Courage and Wealth etc. The heads chosen cover the entire facets of life of mankind to enable him to lead a comfortable, happy and contented life coupled with concern for every ones views and respecting for others feelings besides developing a helping nature.

The author is confident that this handy booklet will definitely be of a very useful tool to every living mankind to enable him to lead a life of Happiness, Trust, Confidence and above all Devotion to GOD.

By profession an Engineer T.T.KESAVAN, joined in the Highways Department in 1956 as Junior Engineer/Assistant Engineer and served in the Department at all levels and reached the top level post of Chief Engineer and retired in 1993 as Head of the Department. During all these years he has been involved in Planning, Investigation, Design, Construction and Maintenance of all Roads and Bridges of State and National Highways and in recognition of his hard and sincere services in the Department, he has been awarded ANNA Award by Government of TAMIL NADU and has also earned the Distinguished Alumns Award of The College of Engineering, Guindy. He has also been the Advisor to Government of Tamil Nadu in all matters concerned with Roads and Bridges.

He has also undergone training in USA, deputed by Government of India, under United Nations Development Programme for one year. His training comprised of both Academic in the University of Cincinnati, Ohio State and practical Training exposed to construction, Planning and Design dealing with Roads and Bridges in USA.

After retirement, he has been working as Consultant for various Consulting Firms in preparation of Detailed Project Reports for construction of Roads, Bridges and Grade Separators in all the States of Kerala, Karnataka, Andhra Pradesh, Gujarat besides Tamil Nadu.