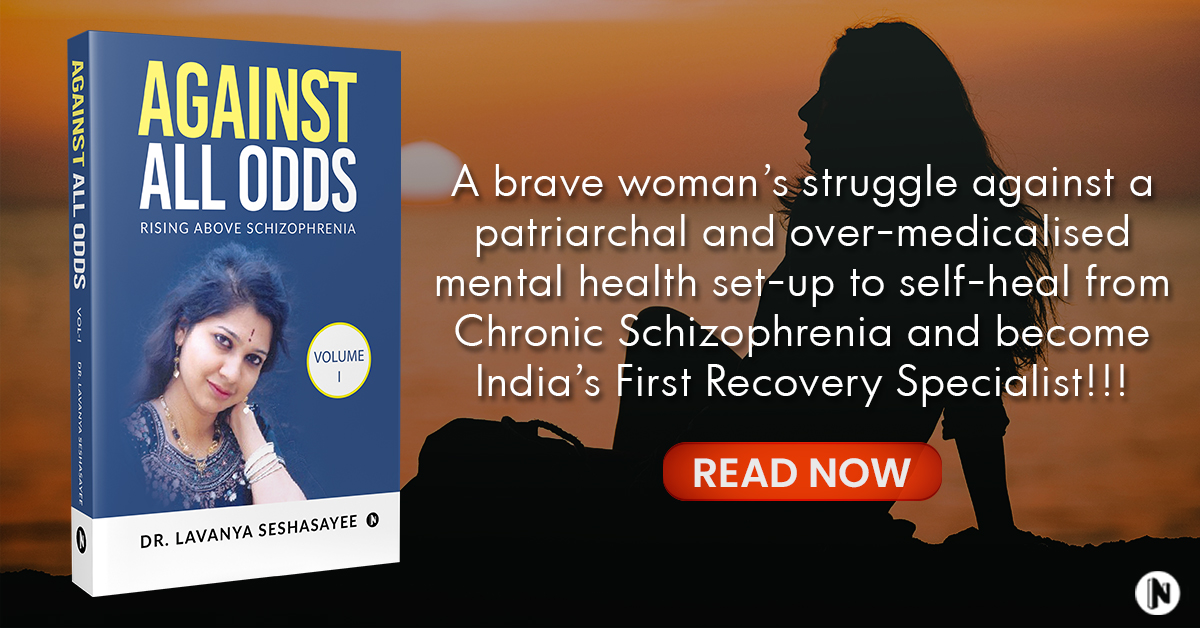 Schizophrenia is among one of the most misunderstood mental health disorders in the world. There’s a tremendous need to implode the myths of mental illness, to put a face on it, to show people that a diagnosis does not have to lead to a painful and oblique life. People who struggle with such disorders can lead full, happy, productive lives if presented with the right resources.

Notion Press, India’s leading self-publishing platform presents – Against All Odds, Rising Above Schizophrenia (Part 1) by Dr Lavanya Seshasayee, a powerfully elucidated story that cries and moans but ultimately sings and celebrates the triumph of the human spirit against the worst odds in life and how Aditi Vaidhyanathan (alias Lavanya Seshasayee) fights to become a Mental Health Doctor, India’s First Recovery Specialist plus a Self-Advocate with a burning desire to change India’s mental health system and patriarchal social fabric.

How is ADITI VAIDYANATHAN, a young intelligent teenager unwittingly pushed into the black hole of chronic psychosis as a result of a highly caustic societal and familial environment that doesn’t encourage the girl child to dare and dream of achieving academic and professional success in the public sphere but instead believes in ‘moulding’ them to be nothing other than ideal wives and daughters-in-law? How does Aditi deal with betrayal by her brother named BOBBY (a Hitler-fan) and a crafty snake-slithery-girl – SWARNAKANTHA, in the neighbourhood (who is almost the same age as ADITI) and craves to obtain a feeling of significance by resorting to devious means of preventing Aditi from studying since she knows she isn’t half as smart as ADITI is at solving mathematical problems and puzzles? How does jealous Aunt SRI VALLI manipulate

Aditi in the ‘FAMILY COURT SESSION’ that compels Aditi to earn a living by doing chores at home despite the fact that Aditi is a rank holder in her 10th grade? What happens next? How will Aditi, totally re-conceptualize Schizophrenia by which she is affected and break the culture of silence so characteristic of Indian patriarchal families and society? Will she die a civil death or fight back patriarchal-psychiatry to create a better world? And how does she – a FAILURE IN 12TH GRADE, manage to operationalize a romantic relationship (with MR. ROHIT – a brilliant, handsome, tall, software engineer working for Hewlett Packard) IN THE MIDST OF ALL THIS CHAOS? (AND do read Parts 2, 3 and 4 of this book which shall follow Part 1).

Lavanya Seshasayee is a Women’s Mental Health Expert, peer counsellor, India’s first recovery specialist and controversial writer as also a self-advocate and legal expert who was once a person with chronic schizophrenia. She dons several hats. She was involved in several consultations to change and challenge the Mental Health Act of 1987 and put up a vitriolic protest against the Mental Healthcare Act of 2017 before and after it came into force.

She has been a part of and held several fellowships at various NGOs such as the Bapu Trust (Pune) and the Banyan Academy for Leadership in Mental Health (Chennai) and worked for rural NGOs. She has since been a rather active critic of the Movement for Global Mental Health. She has contributed and continues to contribute her critical views to the mental health law drafting process in India. As for her other forays into the world of writing, she was part of ‘The Voices Project’ at the National University of Ireland-Galway (Centre for Disability Law and Policy) when she authored a chapter in a book titled Global Perspectives on Legal Capacity Reform: Our Voices, Our Stories published by Routledge Francis and Taylor. She runs the Global Women’s Recovery Movement (GWRM), which helps women reclaim their lives lost to mental illness. She is a devout Christ worshipper.

The turns and twists endured by Dr Lavanya during her journey are what she takes you through her book Against All Odds. Get ready to embark upon, understand and experience this roller-coaster ride!

You can now get your copy of Against All Odds on the Notion Press Store.