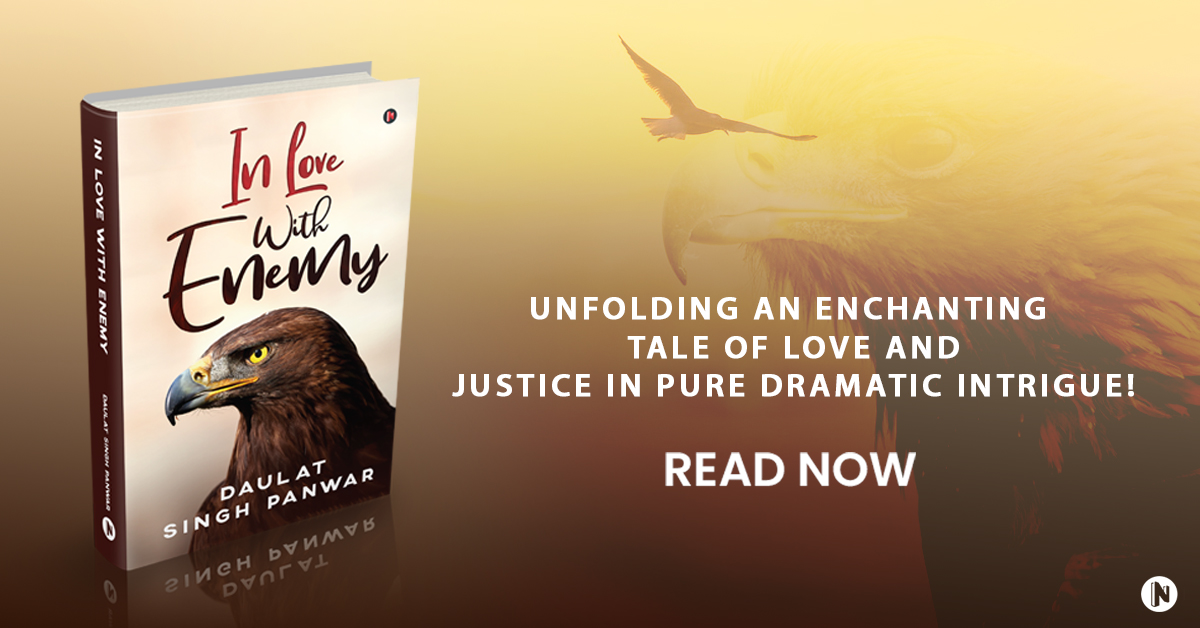 Notion Press’ Latest is a Riveting Tale of Love and Justice

“What we have in us of the image of God is the love of truth and justice.” – Demosthenes.
There is a romance novel for every kind of reader there possibly is. From Contemporary Romance for literature lovers to paranormal romances for sci-fi junkies, you can literally have it all in the world of books. There is everything you’d want: a riveting love story, an intriguing plot, and incredibly captivating characters that you root for from the first page.
Notion Press, India’s leading self-publishing platform, presents In Love With Enemy by Daulat Singh Panwar, an enchanting narrative that unfolds the story of a couple against the backdrop of a contentious subject.
In Love With Enemy turns its first few pages to witness Ram getting engaged to Radha. However, the ceremony falls apart when Radha alleges him of molestation. Subsequently, Ram runs away from home to join the Indian Army. Unaware and purely coincidently, Radha to finds her calling to join the Indian Army as a Military Nursing Service Officer.
As the story progresses, Ram gets injured and admitted in a hospital where Radha was posted. She recognizes Ram, but he doesn’t. Strategically, Radha becomes friendly with him to take revenge. She pretends to be in love with him. She runs away to her home on the night of their engagement ceremony to cause insult and humiliation to Ram.

However, Radha soon realizes that she had made a grave mistake. Her sister informs her that it was not Ram, but her then-boyfriend, now-husband, who was responsible for the mishap on the night of the engagement, mistaking Radha for her.
Radha confesses to Ram and expresses that she had loved him despite being revengeful. They reconcile and get married. They go on to adopt the son of Radha’s best friend, who dies in an accident along with her husband.
However, the plot thickens when Ram witnesses a horrifying rape, and ends up killing the ruthless criminals. He is brought before the court and awarded a death sentence for his actions. The case progresses and is presented before the Supreme Court of India, where the judges ask a question out of curiosity:
Why did he take law in his hands to kill the criminals when they were already incapacitated?

Ram’s response becomes the headline of all major newspapers across the country. Subsequently, the nation rose as a whole against the verdict, and the judges are under pressure. In Love With Enemy by Daulat Singh Panwar unravels the rest of the story in dramatic intrigue.

Author Daulat Singh Panwar was born in July 1948 in a remote village, Ranata in Rajasthan, India. He has led an adventurous life; from becoming the first literate person in his family, joining the Indian Navy, handling a job overseas in the Oilfields of Middle East countries. He transformed from a shy man to a charismatic oilfields safety skills instructor to becoming an officer, an advisor, a manager and a consultant in Health, Safety and Environment.

Singh debuted in the literary world with the publication of a collection of love poems in UK, 1998. He was awarded several Editors’ Choice Awards as well as International Poet of Merit Awards by the International Society of Poets. Singh has authored a book of short stories, three romantic novels in English, and two love and spiritual poetry books in Hindi.

Currently, Singh leads a happy retired life with his family in Ajmer, Rajasthan, India.
Grab your copy of In Love With Enemy by Daulat Singh Panwar in print and e-book format at the Notion Press Bookstore, and amongst leading e-commerce portals such as Amazon and Flipkart.