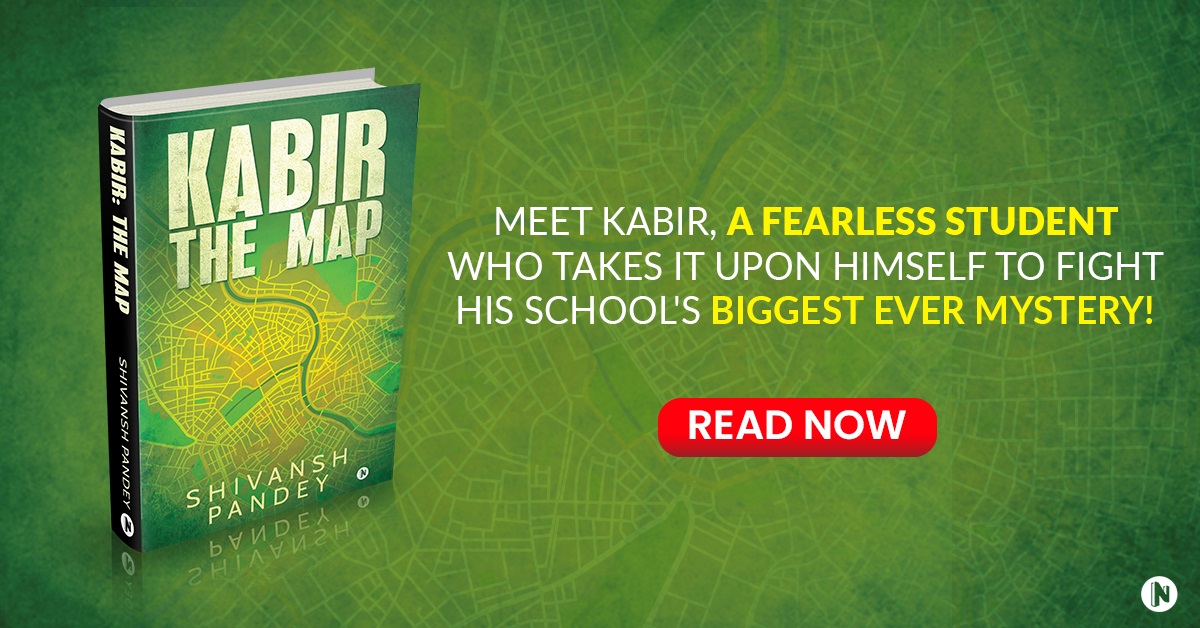 The warmth of summer, like youth, is fleeting this very moment. Nevertheless, the books that we read when we’re young can stay with us for a lifetime. Here’s hoping that when the school bell rings in a few short weeks, it will find you engrossed in such a memorable read, presented by India’s leading self-publishing platform, Notion Press! Embark on an unforgettable literary journey with Kabir: The Map by Shivansh Pandey.

You’re a student at the most prestigious high school in the country, and you’ve been tapped for the most elite secret society. You’ve made it. Set in a fictitious world, Kabir: The Map unfolds a gripping narrative comprising of exciting high school quest in one of the wealthiest, affluent and highly-respected schools in the City of Fanor, Manner Cloak School. It all began when the school started to waive its admittance fee while simultaneously favouring unjust principles by a large margin. This resulted in the formation of a strategic underground society within the school, The Secret. As time passed, The Secret grew successfully with its sole focus to rebel against the school’s management and its unwarranted functioning.

Unfortunately, the society got torn apart in an internal war splitting themselves into four separate clans with a purpose of their own. The Breakers, the Shadows, the Conquerors and the Fixers exist without the spirit of unity and functions within one school by forming their own alliances. But in this power-hungry world where new blood is at the mercy of old money, there is more than just secret societies and high school rivalries that hide among the corridors of this school.

The cordial alliance between the Breakers and the Shadows has given birth to The Residentials while The Kings comprise of the Conquerors and Fixers. In an attempt to maintain peace, the governing body of The Secret, eminently branded as The Crown, created the law that has every clan contributing to The Secret by accepting a minimum of two missions every year. Consequently, The Crown has come up with a strategically-designed programme called the Parent Complaint Department in an attempt to undermine the school’s reigning authority. The job has been entrusted to Kabir; the Chief of the Breakers and the most charismatic and intelligent leader of them all. The plot thickens when Kabir learns that there exists a secret tunnel beneath their very school during one of the Daily Routines. Soon, he picks up the fact that the tunnel has a connection to a terrorist mastermind, Mr John. Kabir: The Map spins an intricate chronicle that follows Kabir on his quest to solve the mystery of the tunnel and to find the answer to one imperative question: What does a bloodthirsty terrorist, Mr John, have to do with his school? Find out in Kabir: The Map!

Kabir: The Map author Shivansh Pandey was born to Dr Punam Pandey and Anjani Kumar Pandey in Kahalgaon, Bhagalpur district of Bihar. He has lived in Bhavnagar, Gujurat and Jamshedpur, and currently resides with his loving parents in Newtown Kolkata. From a very tender age, he was fascinated by the Hindi Film Industry and started developing his own stories in which he always aspired to be one of those stars he used to admire on the silver screen. Through this yearning, he developed his incredible ability for story-telling without even realising it. When his mother encouraged him to focus on writing, he began to pen his very first literary piece. Unfortunately, he was never been able to complete the story as it got deleted unintentionally. However, resilient and unwavering as he is, Pandey started from the very beginning; he started writing his story once again and now, it is known as Kabir: The Map.

The adventure and mystery unravelled in Kabir: The Map doesn’t stop here! Being the first of a trilogy, this book sets the stage for a thrilling saga that is bound to keep you engaged until its very last page! Grab your copy of Kabir: The Map by Shivansh Pandey in print and e-book format at the Notion Press Bookstore amongst other leading e-commerce portals such as Amazon and Flipkart.