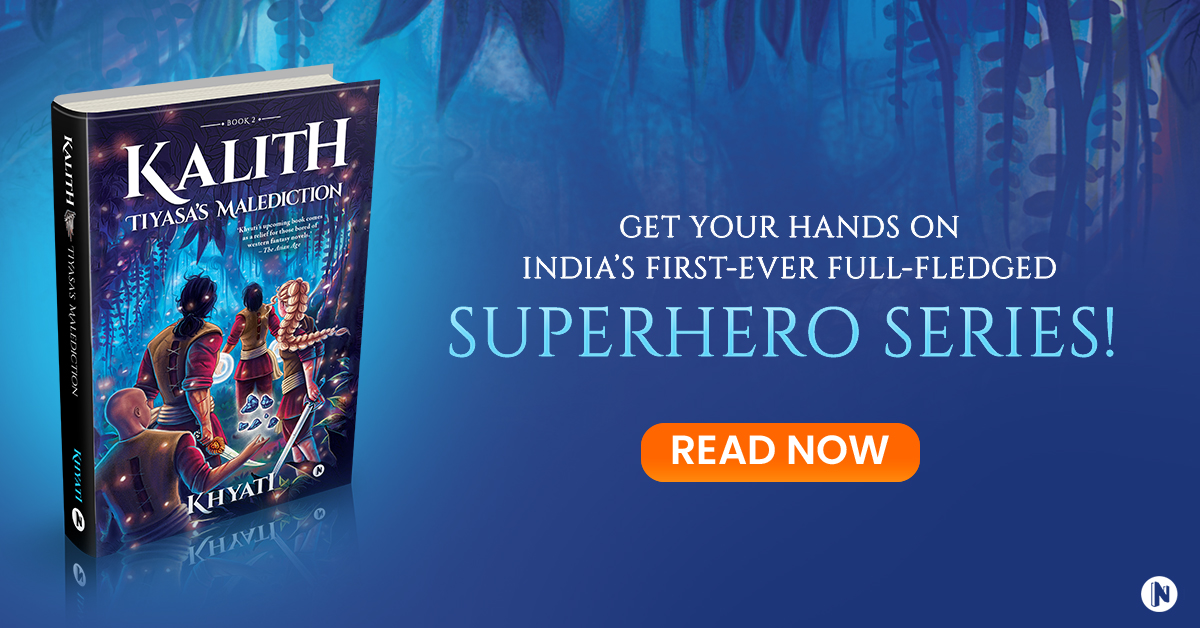 If you are one of those readers who has always enjoyed reading good fantasy fiction revolving around full-fledged superheroes like in the Marvel and DC comics, we have some good news for you! Notion Press, India’s leading self-publishing platform presents- Kalith: Tiyasa’s Malediction by Khyati, the second book in the most awaited Kalith Series.
How many times have you wanted to read a good, completely-established superhero novel in an Indian setup? The Kalith Series has nine warriors, each with their own unique superhuman abilities and gripping origin stories. Author Khyati Agrawal Gupta has meticulously created the Kalithverse. With an engrossing narrative, this book is a refreshing read for all fantasy lovers!

The series revolves around the journey of nine gifted warriors known as The King’s Nine. In this sequel, the aftermath of the Battle of Agnipur has set the sun on the lives of The King’s Nine, completely. As Kalith’s search for his lost father continues, the nine gifted warriors are dealing with the recent murder of their mentor and adjusting to their new frivolous yet hectic lives in the palace, while trying to maintain their sanity against being constantly judged as freaks, paraded around like circus men and derided for being the new king’s First Men in an unstable post-war kingdom.

As The Nine try to find their foothold while trying to stick together and survive as a team, a blood-curdling note from the forgotten past leads them into the musky cages of the snake-infested land of the Vish Kanyas- the Village Of Darkness. The Nine face their biggest nightmare yet as they encounter the nerve-wracking enigmatic Black Princess and her pet Turbans while trying to decipher the gruesome, twisted truth behind the macabre.

An abduction of one of their own takes them into invading the cursed land of Ubhakrat, were accompanied by a valorous navigator with a vendetta of his own, The Nine finally stumble upon their ultimate fate – the reckoning of Tiyasa’s malediction. Choking on the prophecy that mind-numbingly wove everything together and battling the twisted monsters unleashed by this strange land, The Nine will ultimately step up to meet their nemesis- indestructibly powerful, brilliantly all calculating, paramount supervillains- the Traid.

Khyati Agrawal Gupta is a novelist and a doodle artist by profession. She is the founder of the personalized doodle merchandise company dOOdle BARF which was started in 2015. She is an animation and multimedia graduate with a diploma in psychological counselling.

Kalith : Tiyasa’s Malediction is the second book in the Kalith series, the sequel to Kalith: Origin of The King’s Nine, the first book of the Kalithverse which was a roaring success and was featured in newspapers like The Asian Age, Deccan Chronicle, DTNext, Telangana Today and more.

You can now get your copy of Kalith: Tiyasa’s Malediction by Khyati on the Notion Press Store.