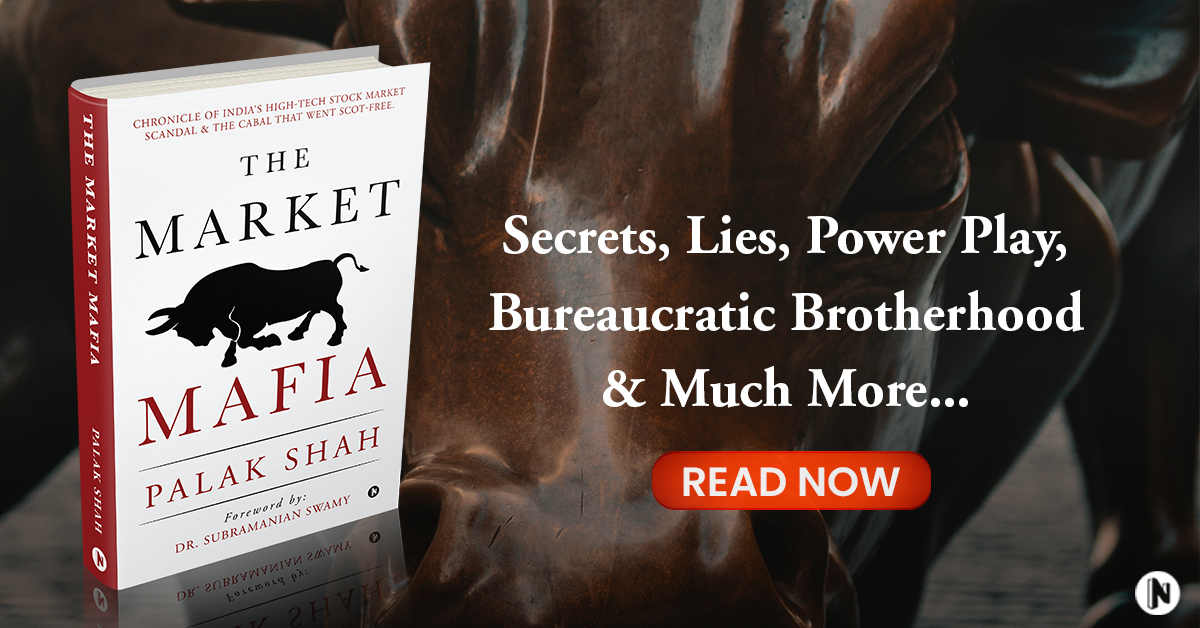 “The Market Mafia – Chronicle of India’s High-Tech Stock Market Scandal & The Cabal That Went Scot-Free” is the first book by Palak Shah, a veteran financial market journalist based out of Mumbai.

The book exposes the dark underbelly of India’s stock exchange ecosystem and corruption in India’s financial market regulatory body SEBI. It is a big expose on how several aspects of the co-location scam have been hidden by collusion between stock exchange officials, SEBI, bureaucrats and stockbrokers.
In 2008, former SEBI chairman C B Bhave’s detachment from his Dharma as ‘the market watchdog’ opened the door for data theft at the National Stock Exchange (NSE), India’s largest asset pool. It also led to the installation of defective Co-location (COLO) trading infrastructure at NSE, by an unofficial decree, which

In 2015, market watchdog SEBI was woken up by an unknown whistleblower, who described the contours of a front-running market operation perpetrated for over five years. It involved the use of tech-driven COLO and High-Frequency Trading (HFT) that was operational at the NSE of India since 2010. Surprisingly, in the five years, SEBI never scrutinized NSE’s COLO grid – an omission of duty – before the whistleblower alleged that it was rigged.

Trillions of dollars’ worth of shares and commodities are traded daily on exchanges in India. A cabal saw an opportunity, studied the loopholes, concocted a sinister plan of action and seized the largest trading grid. Data heist, front-running and skulduggery went unchecked for years at the fastest growing and largest exchange in India.

Harshad Mehta, in the early nineties and Ketan Parekh, at the start of the millennium, became the ‘formidable villains’ in India’s stock market for exploiting the systemic loopholes to manipulate share prices. Once the Demigods of Dalal Street, the rogue stock traders attracted such severe crack-down from government investigative agencies that could shock even the most hardened criminals. But a scandal of much larger magnitude, data theft at NSE and the Multi Commodity Exchange (MCX), that Mehta and Parekh could ever rev-up, has largely remained a mystery.

In the book Market Mafia, Palak Shah’s path-breaking investigative journalism fleshes out the meticulous planning and organization that lay behind the COLO scam, the dark drama involving the SEBI probe and its loosely-knit final verdict. The nexus of tie-suit exes, brokers, bureaucrats and their political linkages pack a punch. Grab your copy now!

Palak Shah has been a journalist in Mumbai for nearly 15-years now. He has covered the financial markets and regulations for most premier pink papers of India like The Economic Times, Business Standard and The Financial Express. Currently, he is working with The Hindu Business Line. Palak was drawn to crime reporting at the age of 19 but a few years in the field told him that the fabric of crime had changed and the organised gangs, as Mumbai had witnessed during the eighties, no longer existed. It was business and markets that dominated the scene. His passion to unravel the intricacies of the ‘white money’ economy led Palak to the world of finance and regulations.