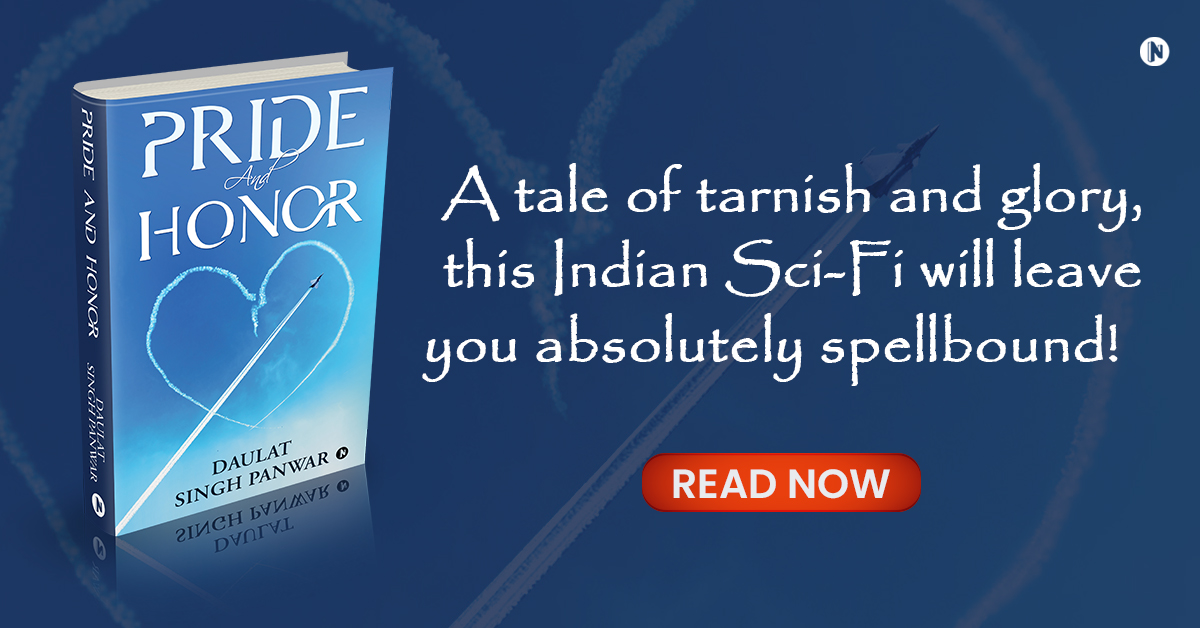 “No person was ever honoured for what he received. Honour has been the reward for what he gave.” – Calvin Coolidge.

Science Fiction, commonly referred to as Sci-Fi, is a broad genre of fiction that involves speculations based on the science and technology of today or tomorrow. Being widely found in most forms of media and entertainment such as books, art, films, television, and games, it is unique to come across compelling stories that intricately weave such speculative fiction into the rich Indian narrative.

Notion Press, India’s leading self-publishing platform, presents Pride and Honor by Daulat Singh Panwar. This captivating narrative unfolds the story of an Indian commander and his wife around the mesmerizing world of space travel and wormholes.

Pride and Honor begin with the only son of an erstwhile ruler of Rajasthan province of India, Vijay Singh Chauhan, joins the Indian Navy, and becomes one of the best fighter pilots of India. He marries a commoner instead of choosing a partner born of the royal blood. This ultimately leads him to be thrown out of his ancestral fort for tarnishing the image of his father and hurting his pride and honour.

On the other hand, Vijay is chosen as the commander of the spacecraft Mangalyyan for Mission Mars. Since the expedition is not economically viable by a single country, for the first time in the history of space travel, NASA and ROSCOSMOS join hands with ISRO for this one goal. Moreover, it is for the very first time that a spacecraft would travel through the wormhole technology by breaking the barrier of the speed of light, and emerge as the world leader in space travel.

As the story progresses, the spacecraft is unable to return even with the help and guidance of the best scientists from across the globe. This is when Vijaya Rani, his wife, steps forward to prove that a commoner woman is no less than a royal blood lineage, and helps Mission Mars with her extraordinary sixth sense in bringing the spacecraft back to earth.

Experience the epic tale that leads the commander to regain the pride, honour and heart of his father, and the hearts of a billion Indians and people from around the world.
Author Daulat Singh Panwar was born in July 1948 in a remote village, Ranata in Rajasthan, India. He has led an adventurous life; from becoming the first literate person in his family, joining the Indian Navy, handling a job overseas in the Oilfields of Middle East countries. He transformed from a shy man to a charismatic oilfields safety skills instructor to becoming an officer, an advisor, a manager and a consultant in Health, Safety and Environment.

Singh debuted in the literary world with the publication of a collection of love poems in UK, 1998. He was awarded several Editors’ Choice Awards as well as International Poet of Merit Awards by the International Society of Poets. Singh has authored a book of short stories, three romantic novels in English, and two love and spiritual poetry books in Hindi.

Currently, Singh leads a happy retired life with his family in Ajmer, Rajasthan, India.
Grab your copy of Pride and Honor by Daulat Singh Panwar in print and e-book format at the Notion Press Bookstore, and amongst leading e-commerce portals such as Amazon and Flipkart.