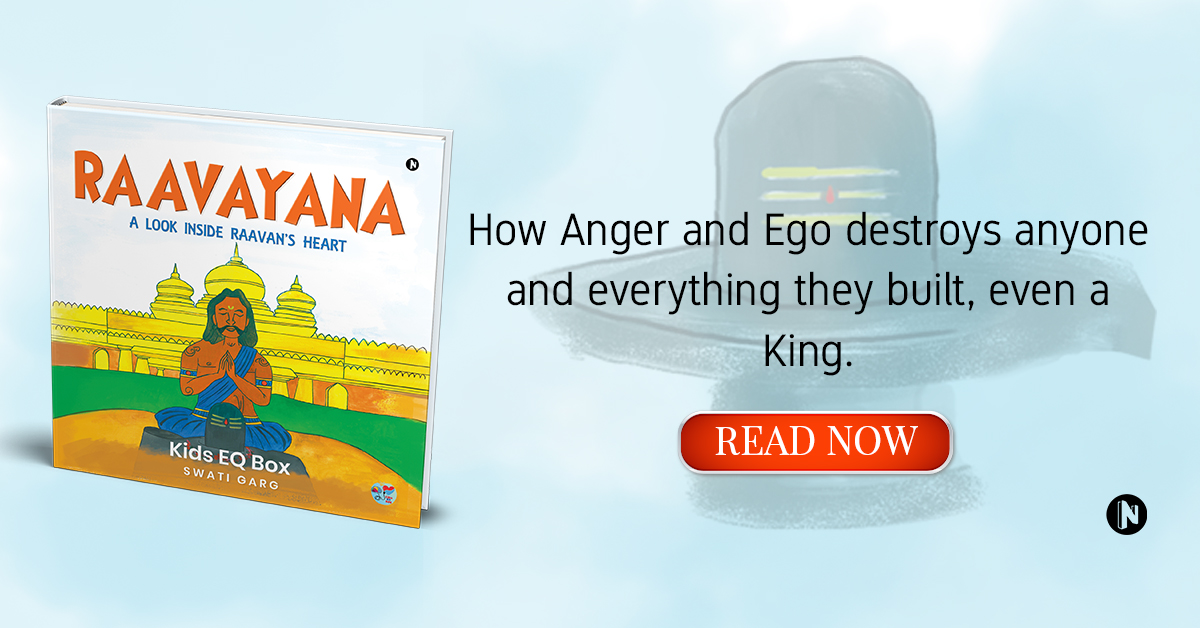 Out of the many tales that are portrayed in the Ramayana, the one that definitely stands out is the story of Ravana, the King of City Lanka. Notion Press, India’s leading self-publishing platform, presents Ravayana by Kids EQ Box, a relook at the immortal legend that possesses Shakespearan depth and tragedy in a new light.

Raavayana by Kids EQ Box is a look into Ravan’s heart. It is, in fact, a book that retells the story portrayed in the Ramayana from the eyes of the antagonist, Ravana. At the beginning of the story, Ravana is a completely different person. Remembered as a strong and intelligent individual, he was a zealous devotee of Lord Shiva and was reputed to have been an exceptional ruler of City Lanka, a dying land he turned into a golden city. However, like us, all is well until we internally crave for something that was never destined to be ours. We let our emotions get the best of us; we let these feelings bring us down from our thriving existence. In the story, Ravana receives news about Sita, and her search for the perfect groom through a competition arranged by Raja Janaka. The legend has it that Raja Janaka declared that whosoever merely picks up Lord Shiva’s bow would win Sita’s hand in marriage. While many kings and princes tried their best, Ravana was assertive that it wouldn’t be possible by anyone except him. Or, so he thought. Ravana’s spirit came crashing down when Rama was able to do the incredible. Ignited by fires of sadness, anger and ego, Ravana swore to make Rama feel what he felt someday. Revenge; that is all he had in his mind. The story continues to depict the consequences of his impulsiveness that arose from his negative emotions, consequences that eventually cost him his city, as well as his own life.

What sets Raavayana apart from the other children’s books are the alluring artworks created by ShikhaVijaivargia that goes an extra mile in offering a new dimension for every child’s imagination. Moreover, the book is structured in a way that the entire narrative rhymes with a certain appealing rhythm that is sure to inspire children to start writing their version of well-known stories or even, their own stories. However, the main takeaway of Raavayana, ingeniously titled, is a lesson that applies to a person’s life in any period. Being a person of great capabilities and intellect, Ravana lost everything only because he allowed anger and ego to creep into his mind. This is what Kids EQ Box aims to focus on; educating young minds with respect to emotional well-being. The book aims to make every child aware of the options they have when they face conflicts – the option of solving matters in a peaceful manner by simply talking it out. Sometimes the greatest problems in life can be solved with the simplest solutions. A look inside Raavan’s heart would help children realize that they should always consider all the angles of a situation before reaching a conclusion. If that was so, Ravan could have avoided the war completely. He could have prevented the grief and destruction that overtook his beautiful city. He could have saved himself.

Raavayana author Swati Garg works in the field of emotional intelligence for kids through her venture Kids EQ Box. Being a passionate mother and an avid reader, Raavayana is an attempt by Swati Garg to try and help young minds to realize how destructive anger and ego can be. Since Garg has been fascinated by Indian mythology, this book is set around the Ramayana.

Raavayana by Kids EQ Box highlights the fact that violence only wields destruction. Aiming to inculcate the sense of emotional wellbeing in every child from a young age, Raavayana is the perfect book that infuses interesting Indian mythology facts with captivating artworks. Grab your copy of Raavayana by Kids EQ Box in print and e-book format at the Notion Press Bookstore amongst other leading e-commerce portals such as Amazon and Flipkart.