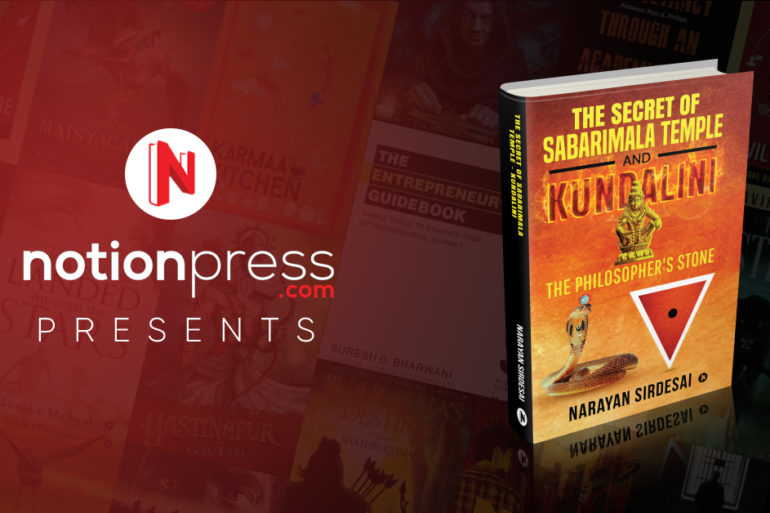 Notion Press Presents The Secret of Sabarimala Temple and Kundalini

The debate of letting women into the Sabarimala Temple has been a topic that has made headlines frequently over the past year. But, do we truly know the reason behind why women are not allowed in or are we to remain in ignorance of the root cause. Rishis made the customs after scientific validation working on the same principles as modern day scientists.Notion Press, India’s leading self-publishing platform, presents The Secret of Sabarimala Temple and Kundalini by N.R. Sirdesai. A firsthand perspective into what the Kundalini Shakti is and how it manifests in each individual alongside an in-depth look into what siddhis are and what is Self-realisation and Enlightenment. The author claims by personal experience and by experiences of other gurus that women under menstruation were not allowed to meet saints or visit temples as menstrual vibrations seriously affect the health of brahmacharis in whom the Kundalini Shakti has fully awakened.

N.R. Sirdesai is a Goan, born and brought up in Mumbai. He was educated at St Xavier’s

High School and St Xavier’s College Fort and after that did his B.E. in Electrical Engineering

from College of Engineering, Goa. Presently, he is working as Head Projects in a reputed

power company, which he has served for the last 32 years. From his early twenties, he was

interested in yoga and spirituality and met his satguru at the age of 25 years in 1989. Six

months after his initiation, he started having intense experiences of Kundalini Shakti which is

said to be the primordial energy and the spiritual evolutionary power in man.

At the age of 28 years, the Kundalini reached the highest chakra, the sahasrar and the author experienced his first nirvikalpa samadhi. At the age of 32, when he was still a brahmachari, he started to become seriously affected by vibrations arising from women in their menstrual cycle to the point of falling seriously ill. It lasted for about nine months till his marriage. Therefore, the author understood why the ancient rishis started the practice of not allowing menstruating ladies to visit saints, mystics, and temples. This scientific reason for knowing this custom is very important for people amidst the ongoing controversies at Sabarimala and Shani Shinganapur and the pending case in the supreme court.

When he was 49 years, after a sudden rush of Kundalini to the brain, he found that from the next day onwards, he got the gift of literature, poetry and the flooding of spiritual insights.

The book also contains the authors unique thoughts into the phenomenon of death, the Vedas, Upanishads, Epics and Puranas, the immortals or chiranjeevis in Hinduism, miraculous healings at temples, the existence of divine planes and devas/devis there-in, esoteric rites and rituals of Hinduism.