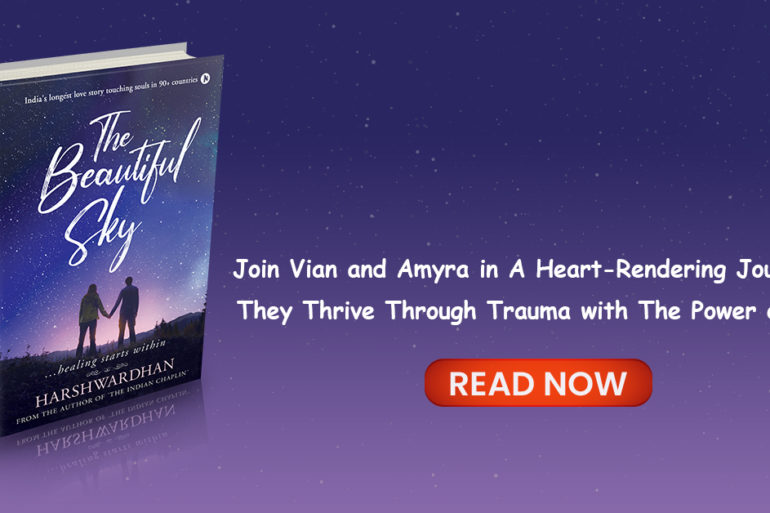 Notion Press’ Latest Is Story About Healing From Within

“Medicine, law, business, engineering, these are noble pursuits and necessary to sustain life. But poetry, beauty, romance, love are what we stay alive for.” ― Tom Schulman, Dead Poets Society

Are you someone who believes that everything happens for a reason? Sometimes, you can dream and dream and paint a pretty future, but life throws something completely different at you. You struggle and you stumble, but you end up right where you deserve to be. Call it fate, call it destiny, life is an amalgamation of serendipity. Here is one such story, a story of love, life, and longing.
Notion Press, India’s leading self-publishing platform presents, The Beautiful Sky by Harshwardhan M Patil.

This is the story of a madman, dreamer, and shayar, Vian. With a strong faith in the law of attraction, he believes everything happening in the universe has a cause and that somehow we all are connected. He lives his life as per the unknown book ‘A Good Boyfriend Is A Terrible Ex-Boyfriend’. But when true love comes knocking on his door, it is accompanied by hurt and pain.

A week before their marriage, Vian’s love Amyra is gang-raped and Vian is brutally beaten up. Trapped in a stage between life and death, God asks Vian what he can provide in return if he is granted a second life to save Amyra. Vian’s trade decides his destiny and faith.

Author Harshwardhan M. Patil, a graduate from SPCE, Andheri is a civil engineer turned novelist. After having started his writing career as a novelist and a stand-up comedian, Harshwardhan has performed several shows in Mumbai and Pune. While learning theatre for his first novel, he won the best stage Playwright award in 2016 Enatya Sanhita for his story ‘Phantom Mind’. His debut novel ‘The Indian Chaplin’ was made available on Amazon in 2017. Harshwardhan was also nominated in Asia Pacific Screen Awards 2019 amongst the world’s top 15 screenwriters for his story ‘8 Days With A Militant’. He is mostly known for experimenting and adapting new techniques of storytelling. He has been learning Shayari for a year for The Beautiful Sky. His ideology is that a storyteller shouldn’t have any limitations and should be able to perform through any art form. Harshwardhan’s strength is his non-linear and multi-genre storylines.

The Beautiful Sky is now available on all major e-commerce platforms including Amazon, Flipkart, and the Notion Press online store. Grab your copy now!