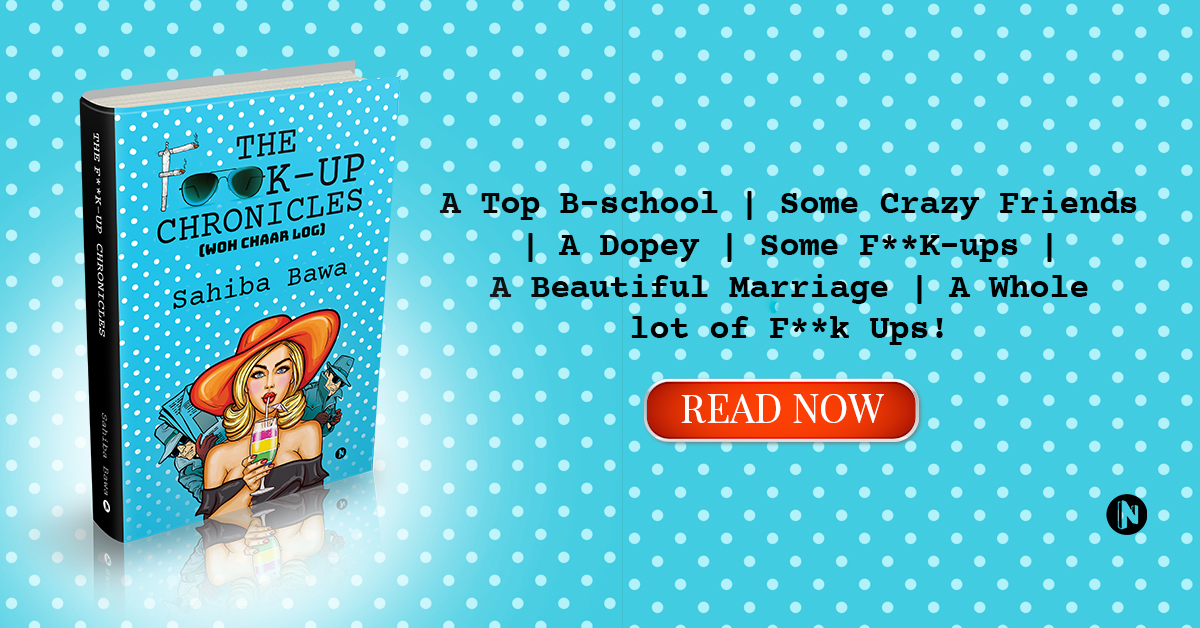 The F**k-Up Chronicles by Sahiba Bawa under Notion Press, India’s leading self-publishing platform, is a refreshing take on those wistful collegiate years and one that carries a deeper social message. The story revolves around the young and unwavering Samaira Luthra in a ruthless world. For the very first time, she is away from home; she is truly in charge of herself. More importantly, it is her opportunity to explore herself and her identity away from everything and everyone she knows; an identity that would essentially define her and carry her through adulthood. Or, perhaps not.

Samaira, at 22, was a bold woman who would readily put her life on the line to save her friends. Strong and determined, she even went on to save an accidental druggy from killing himself and saved a bunch of her friends from getting arrested during her time she spent pursuing MBA. She never gave up on her comrades and ensured that they had her no matter what. This period in the book is set in a relatable university environment filled with life, energy, parties, ecstasy, and a secret LGBT society. She was her truest form; however, she never expected her own home, with her own family, is where she would lose herself.

The story begins with the ending. Ten years later, Samaira is on the ledge of committing suicide, and she decides to take a leap. The book goes on to uncover what happened and why Samaira was driven to give up her own life. The story keeps flipping back and forth between two time periods – 2009 and 2019. As the story unfolds, it vividly portrays the stark contrasts between the various educational and peer pressures of one’s 20s and the darkness of the responsibility-laden married years of their 30s. Inspired by a true story, The F**k-Up Chronicles speaks about pressing issues that are more than just breakups, makeups, and typical marriage disputes. It talks about what every woman faces in their own households; in the hands of their own family. It depicts how women are expected to merely ignore or bear the pain, and how it traumatizes and breaks them, physically and mentally, and leaves them beyond repair.

The F**k-Up Chronicles author Sahiba Bawa is an expert in the field of Hospitality and excels at designing and managing pubs, art cafes, and salons. As an MBA graduate from IBS Hyderabad, Bawa has authored vocational courseware with NCERT, KRIVET (Korea), and MHRD. With the knowledge gained as an ardent reader and an English Literature graduate from IEHE, Bhopal and Cambridge University, Bawa has penned The F**k-Up Chronicles, her debut fiction novel, with shades of nostalgia, drama and comedy without losing focus on the main aspects of the story; women empowerment and mental health. She finds immense delight in being a writer for the stories narrated by her 4-year-old daughter, and the duo is currently authoring a children’s storybook. At present, Bawa is working on a healthcare book for the Ministry of Women and Child Care Development, a book on a tender heartbreaking romance of a half-abandoned pet, and a romantic screenplay set at a time of war.

The F**k-Up Chronicles is perfect if you’re looking for a light read that effortlessly merges the past and the present to tie off an impactful social message. Grab your copy of The F**k-Up Chronicles by Sahiba Bawa in print and e-book format at the Notion Press Bookstore amongst other leading e-commerce portals such as Amazon and Flipkart.