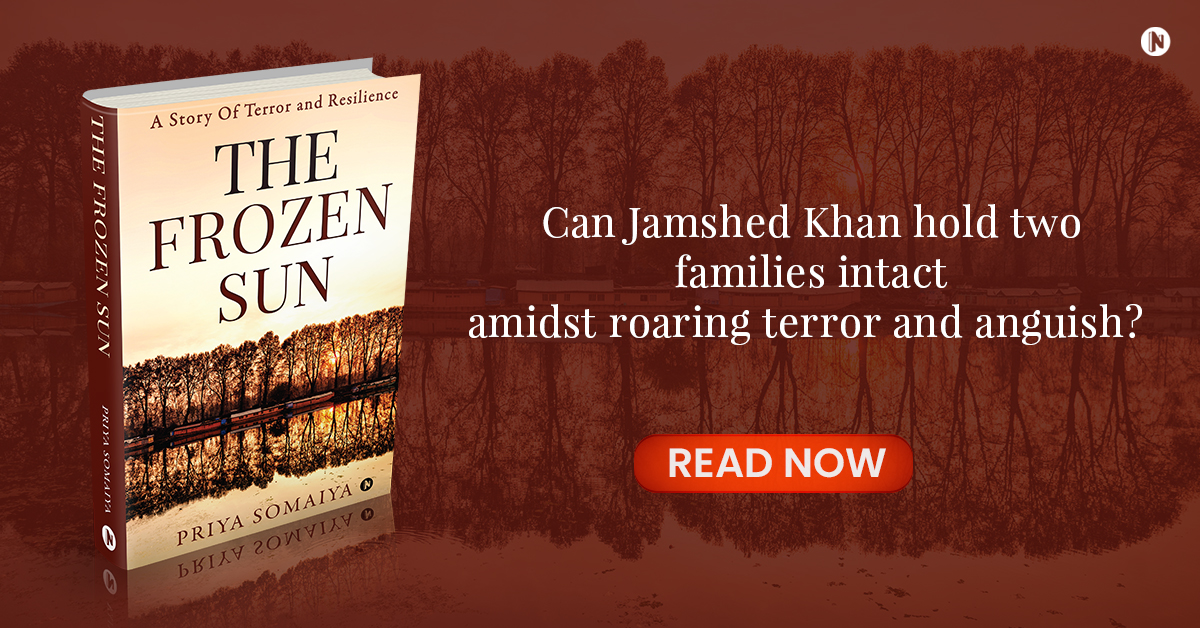 Notion Press’ Latest Is A Story Of Terror And Resilience

On the night of 19 January 1990, all hell broke loose in Kashmir, a place often known as ‘Heaven on Earth’. In the lead-up to the events of 1990, Kashmir was in ferment. Terror, Pain and trauma took over the lives of several Kashmiris, before, during and after. It has been 30 years, and the exodus of Kashmiri Pandits from the Kashmir Valley has remained a subject that has been on the darker side of the penumbra until recently. Here is a story set in Kashmir that opens a window into the anguish suffered by several and the brave showcase of true resilience. Notion Press, India’s leading self-publishing platform presents The Frozen Sun by Dr Priya Somaiya.

This is a personal and intimate story of two families who reside in Srinagar as neighbours for several decades. The legendary Jamshed Khan attempts to steer the two families through the ravages of terror and violence that took over the valley. The words and actions of many in the book reflect the historical anguish and pain which Khan struggles to knit together while responding to lives and devastating times. Against the backdrop of the grand Himalayas, the Chinar forests and the gurgling Jhelum, the story unfolds to a reality that must matter to all.
Bringing to light the suffering of several communities, the sorrow in the loss of place and identity and with a strong message to learn from, this book is engrossing and educative.

Priya Somaiya is a Kashmiri Pandit born and brought up in Allahabad, Uttar Pradesh. She has never lived in Kashmir but visited work many times. Priya’s forefathers had migrated from Kashmir about two centuries ago to escape forced conversions and ended up settling in Madhya Pradesh. Her grandfather Dr Kailash Nath Katju, out of sheer determination and hard work earned a position as a leading criminal lawyer pre-independence and had roaring practice and success at the Allahabad High Court. He had later joined the Quit India Movement with Mahatma Gandhi and held several prestigious positions in the Government post-independence such as Law Minister of India, Defense Minister and Home Minister with Pandit Nehru in the central cabinet, Governor of Orissa and West Bengal and Chief minister of Madhya Pradesh.

Priya’s father, Justice Brahma Nath Katju retired as the Chief Justice of Allahabad High Court. Her brother Vivek Katju is a retired diplomat and was the ambassador of India in Afghanistan, Burma and many other such assignments. Her first cousin Justice Markandey Katju retired as a Supreme Court judge. Her family had initially been through the struggle of immense uprooting and adjustment, adaptation and re-establishing, and worked their way up through hardships. Priya yearns to return to the land of her forefathers as her identity is strongly anchored in the valley.

The author has four decades of work experience as an HR practitioner and is a leading HR consultant and OD specialist of India. She has contributed immensely to Social Services and the Development Sector. She has been engaged in interventions and initiatives for the skilling of rural women across India and the SARC region. She has led the Usha Silai School initiative for skilling in sewing and stitching of Kashmiri women in many regions of the Kashmir valley. She has a PhD in Psychology from Allahabad University.

The Frozen Sun by Dr Priya Somaiya is now available in e-book and paperback formats across all major e-commerce platforms including Amazon, Flipkart and the Notion Press online store. Grab your copy now!