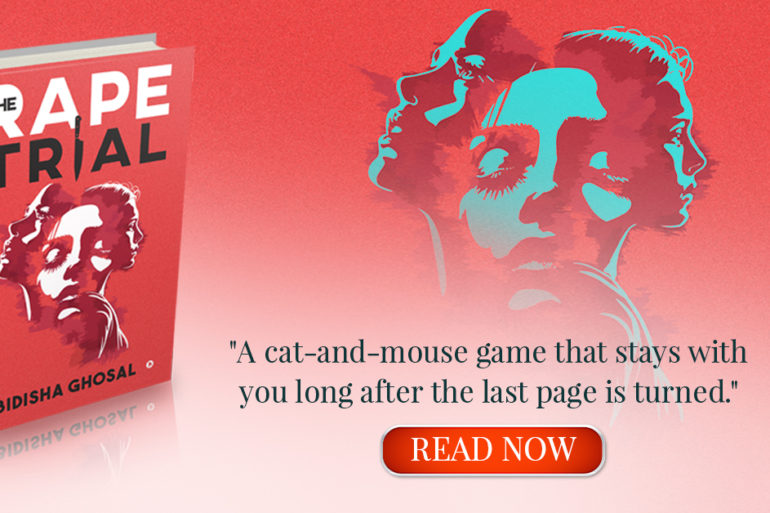 Dwelling on the highly relevant subject of sexual assault, Bidisha Ghosal has composed a complex, gripping narrative with her debut novel, The Rape Trial. She goes beyond the usual trauma-survival tale to explore how our culture of silence shapes and informs sexual violence.

The story begins after a pause.

Years have passed since Avni Rambha suffered brutal sexual assault. The accused, golden boy Rahul Satyabhagi, sole heir to the $24billion Satyabhagi business empire, had walked free after mounting a successful legal defence. He then reinvented himself to become a dynamic poster boy for men’s rights, the survivor of a woman’s plot to falsely incarcerate him. The who’s-who of Badrid Bay, eager to put the sordid mess behind them, breathed a sigh of relief, and Avni Rambha moved bag and baggage out of the country to find peace.

Now, a sting operation exposes him for what he truly is – what many, including Rhea, Hitaishi and Amruta, had suspected all along – an entitled, remorseless rapist living under the garb of a new-age modern man. Being exposed only enrages him into launching further attacks, on the media, on the reporter, even on Avni though she’d distanced herself years ago.

People around him flinch away in disgust. What can one do, anyway, when the rapist is someone you know? Someone found innocent in the eyes of the law? Who jokes about the survivor getting raped again?

Rhea, Hitaishi and Amruta’s friendship has run deep and true for over a lifetime, but they struggle to answer these questions together. Should they continue to do nothing? Can they? And if they are to do something, what would that even be?

They aren’t the only ones at a crossroad.

DC Dixit used to think that the Rambha rape was a false allegation hiding an extra-marital affair. The expose is an eye-opening twist; one he thinks can be easily managed. But this isn’t the end, it’s the beginning, and the events that follow are jaw-droppingly audacious.

Without warning, Dixit finds himself at a turning point in his career. Instead of the expected resolutions, he finds himself going down an unfamiliar path. Little does he know that the path has been carved out by Rhea, Amruta, and Hitaishi. Do the hunted know they are being chased? Does the hunter know what they are hunting? Dixit gets his answers, but does he get his peace?

The story deals with something we never acknowledge – that we create the rapists. We give birth to them, nurture them, encourage them, and then protect them with sealed lips and a let’s-move-on attitude. Most assaulters are friends and family, neighbours and colleagues, and the story is a great illustration of why survivors hesitate to speak out in the first place.

Bidisha Ghosal received two prestigious journalism awards before moving on to write this, her first novel. During this time, she became involved in creating The Diaries of a Stubborn Homeopath, the lucid and engaging memoirs of the late great homoeopath, Dr Prasanta Banerji, she being Dr Banerji’s eldest grandchild. While that was narrative non-fiction, The Rape Trial combines her obsession with thrillers and her fierce perspective on society.

Grab your copy of this highly original book in paperback or ebook on the NotionPress web store and from other leading e-commerce portals like Amazon and Flipkart.